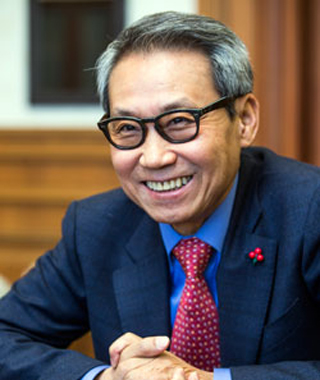 Korean public organizations and public workers have to move faster to adapt to external changes outside the country, Minister of Personnel Management Lee Geun-myeon said.

“Korea’s public servant community reacts slowly to the external environment and changes in the rest of the world,” he said. “When a country falls behind in global competition, there is no secure future for public workers, either. Some countries have faced bankruptcy.

“Public servant positions can’t exist if workers are not able to keep up with the public.”

In line with this philosophy, the 62-year-old placed a standing signboard outside his office on Nov. 19, his first day, that counts down the first 100 days since his appointment. The calendar, he said, gives him a deadline by which he hopes to finish planning a three-year personnel management reform plan.

Since that day, Lee has been all business, foregoing relaxing midday breaks to hold luncheons and banquets. This way, he can meet more people in a number of sectors and listen to their opinions.

He figures that he tends to make tough choices when he’s faced with difficult decision-making moments.

Even his name, Geun-myeon, means “diligence” in Korean.

Lee was scouted to lead the government’s personnel management department after working for the past 37 years at Samsung Group.

“Personnel management is based on trust among employees,” he said. “I stand by the philosophy that you have to love human beings in order to work in human resources.”

The JoongAng Ilbo recently sat down with Lee to discuss his first month at work. The following is an edited excerpt:

Q. How was your first month as minister?

A. I simply focused on setting my priorities. I tell my fellow civil servants that I am also a civil servant, just like them [who truly work for the public good], not someone who happened to become a civil servant [via appointment]. At first, I simply said no when rejecting proposed projects, but now I’m the one who tells them how I hope to lead the projects.

Many people don’t understand why civil servants are guaranteed stable salaries and compensation even when they lack work ethic or perform poorly.

Job stability for civil servants cannot be maintained when the state doesn’t develop. Government employees with outstanding performances should be better compensated, but it’s problematic that the current system grants equivalently high benefits to low performers. There should be public consensus on this issue. We should create an honest organizational structure that benefits all three parties - the state, citizens and civil servants.

When are you going to implement reforms for the civil servant retirement system, which postpones the retirement age to 65 and implements a peak wage system?

Korea has already reached a technical life expectancy of about 100 - the nation’s average life expectancy is about 82 years. We still need a society-wide consensus to fully implement a civil servant retirement system reform package.

But what is clear is that we can’t avoid extending the retirement age and implementing a peak wage system [in which older employees’ wages are reduced as the retirement age is delayed] in time when people can live up to 100 years old.

The government can save about 155 billion won [$141 million] annually by eliminating paid leave. This allows the government to hire substitute workers to replace those on leave: This is the job-sharing effect. When more civil servants travel inside Korea, they contribute to boosting domestic consumption and the domestic economy.

What about civil servant pension reform? What is the consensus on the issue?

[Pension] reform is unavoidable, and we will end up overhauling the system. Most significant in the process is that we reach a consensus with both public and civil servants, who are the biggest stakeholders.

If the National Assembly, which ideally represents the views of the citizenry, agrees with pension reform today, then we are willing to push our plan as early as tomorrow. The Korean public expects a lot more than pension reform. We need to go a step further than that.