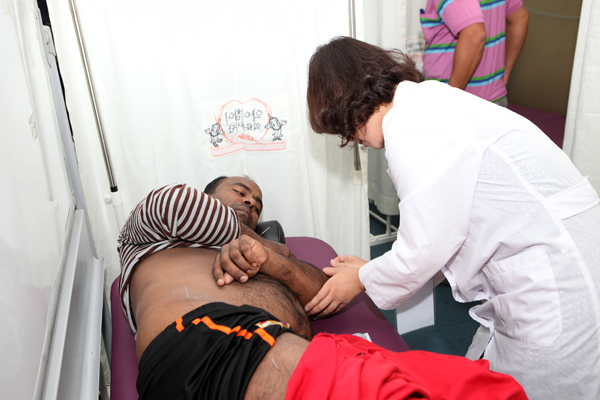 Yoon Jin-young, a researcher from the Korean Pharmacopuncture Institute (KPI), provides acupuncture treatment at the Qatari army hospital in Doha. Provided by KPI

On Dec. 15, a group of patients flocked to a building in Doha, where a Qatar army hospital was scheduled to move.

Although the building wasn’t ready to open and didn’t have any equipment, patients continued to flow in, having been informed that Korean doctors from the Korean Pharmacopuncture Institute (KPI) would be providing free treatment at the invitation of the country’s military.

Acupuncture and herbal medicine are little-known subjects among locals there, but the procedures proved immensely popular and drew about 100 patients to the hospital over two days.

“I used to have pain in my shoulder, but the pain has been significantly reduced since I received acupuncture,” said Hassan, Qatari army sergeant who requested that his full name not be used.

As a country with deep Islamic roots, public facilities in Qatar are strictly divided between men and women. But when it comes to receiving acupuncture treatments, those boundaries become blurred.

“A woman who was fully covered took off her hijab without hesitation to show her wound,” said Lee Dong-hwi, the director of planning for KPI.

Word about the medical demonstrations even spread to Qatar’s royal family.

KPI Vice President Kwon Ki-rok made house calls twice, once upon the request of the sister of the public health minister at the Supreme Council of Health, and once for an appointment with the cousins of the royal family.

Maj. Gen. Mubarak A. Al Abdullah, the commander of the Qatari army, invited the Korean doctors to dinner on Dec. 17, when he announced that the army was planning to build a Korean medical clinic in the hospital and asked for a list of materials and equipment required.

“Establishing a Korean medical clinic in the Qatari army hospital will be the first case [in which Korean herbal medicine] will be expanded to the Middle East,” said KPI President Kang Dae-in.

Al Abdullah will visit Korea in January next year to discuss with KPI detailed plans for opening the clinic.