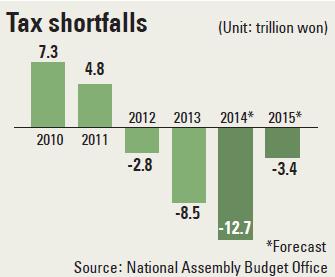 Despite the government’s efforts to boost the economy this year particularly in the second half, the tax revenue shortfall is expected to be near 13 trillion won ($11.8 billion).

If so, this will be the third consecutive year that the government’s spending exceeds tax collections.

According to the National Assembly Budget Office on Sunday, the national tax revenue shortfall will be roughly 1 trillion won to 2 trillion won larger than an estimate made in July, which was around 10.7 trillion won.

The shortfall is expected to widen due to continuing stagnation of the domestic market and the worsening performances of major companies including Samsung Electronics and Hyundai Motor.

However, such efforts haven’t managed to push the economy up largely due to external factors, such as the depreciation of the Japanese yen that hurt Korea’s exports in the global market as well as decelerating growth in major economies other than the United States.

In the first quarter of the year, Korea’s listed companies saw combined net profit increase 4.1 percent year-on-year. But that slowed to 1.6 percent in the second quarter largely due to the dampened consumer sentiment following the ferry sinking that killed over 300 passengers and crew in April. Choi’s stimulus was aimed at restoring market confidence and boosting expenditure.

In the first couple of months it seemed to be working, as the stock market started to show signs of recovery. Such efforts were further solidified when the Korean central bank in August lowered the key interest rate for the first time in 15 months.

Yet as the global market started to decelerate and uncertainties grew, the net profit of listed companies in the third quarter fell 11.9 percent year-on-year.

The budget office estimates that at the current rate, the government could only collect as much as 204.8 trillion won for the year, which will widen the tax revenue shortfall since the government budget is set at 216.5 trillion won.

The shortfall will be nearly 50 percent more than the 8.5 trillion won shortfall in 2013.

Even for next year, the budget office estimates a minimum shortfall of 3.4 percent.