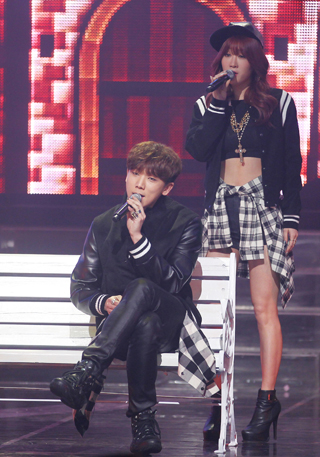 This year’s rulers of the real-time music charts 688 hours at No. 1 : “Some” by Soyou, right, and Junggigo

Gossipy rumors, malicious web comments and album sales are some indicators that gauge an act’s popularity, but music industry insiders and musicians agree unanimously that one more thing has to be added to the list: real-time music charts.

Real-time music charts show which songs are being downloaded and streamed on a real-time basis.

“We check out real-time music charts as if we check out the daily stock market,” indie duo 10cm said during a recent press event prior to the release of their third studio album in November. 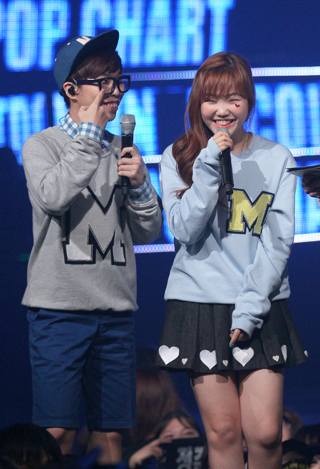 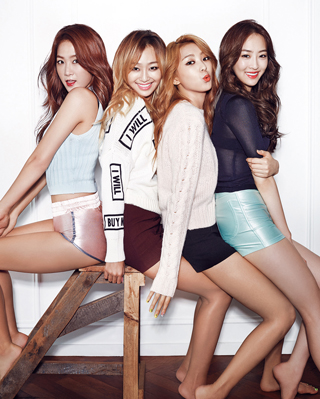 To put it simply, getting onto the real-time music chart is a sign that shows whether or not a song is commercially successful or not.

Although major music portals such as Melon and Genie offer weekly and monthly music charts, none exert as much influence as real-time charts.

With the aid of Genie, the JoongAng Ilbo, an affiliate of the Korea JoongAng Daily, looked into the songs that topped those charts.

The year’s most dominant song

Between Jan. 1 and Dec. 12, 180 songs topped Genie’s real-time music chart. A single song stayed at the top of the chart for about two days on average.

Of all the No. 1 hits this year, “Some,” a collaborative project between Soyou, a member of Sistar, and Junggigo, an R&B singer, remained at the top for the longest time - 688 hours.

The second and third ruler of the real-time music chart was “200%” from brother-sister duo Akdong Musician and “Let It Go” by Idina Menzel. The two stayed on top for 483 hours and 292 hours, respectively.

Out of all the entertainment companies, Starship Entertainment and YG Entertainment had noteworthy performances on the real-time music chart. Starship is home to musicians Sistar and K.Will and YG is behind artists like Big Bang, Akdong Musician and 2NE1.

Soloist IU also lived up to her reputation by placing five of her songs at the top of the chart.

Of the 180 songs that made it to No. 1 on Genie’s real-time music chart this year, 51 were collaborative projects consisting of more than two musicians.

Pairing up seems to have become a surefire way to steal the public’s attention.

Apart from “Some,” “A Midsummer Night’s Sweetness” by San E and Raina, “Your Scent” by Jung In and Gary, and “The Space Between” by Soyou and Urban Zakapa were some of the most beloved collaborations this year.

Older Korean songs from the ’80s, ’90s and 2000s were also often given a new lease on life by competitors on TV audition shows.

Just like the most frequently searched keywords on major web portals, which change constantly, real-time music charts reflect what people want to hear.

Changes brought by the charts

If a digital single fails to penetrate into the top 10 the day of its release, there is a slim chance it will ever make it onto the list.

In consequence, entertainment agencies put all their efforts into promoting the album or song before it is released.

Proof of this is the fact that most of the No. 1 songs this year went straight to the top of the charts when they were released.

Only five, including “I’m Fine, Thank You” by Ladies’ Code and “I Can’t Go to Sinchon” by Postmen, made it to first place months after they were released.

“I’m Fine, Thank You” was originally released last year, but the song topped the chart through the collective efforts of music listeners who wanted to pay tribute to Ladies’ Code after two members of the girl group died in a tragic car accident in September.

“I Can’t Go to Sinchon” was also released last year but came under the spotlight again after it was sung by a contestant this year on the TV audition show “Superstar K6.”

In order to get much-needed publicity, entertainment agencies tease images and short video clips of musicians one after another and also allow select fans and the media to listen to entire albums before the official debuts.

Seo Tai-ji came back to the music industry in October after five years. Fortune Entertainment, the agency in charge of promoting the star’s album, began marketing it two months before its release.

“Pre-marketing accounts for 80 percent of the whole promotion,” said Lee Jin-young, the head of the entertainment company.

“Once you fail to break into the chart, the entire album loses momentum.”

Most entertainment agencies opt to push out tracks at midnight rather than at noon because the number of online users decreases around that time.

Ardent fans of a certain musician stay up to download and stream the star’s new release, making it easier to rank high on the music charts.

Meanwhile, some say real-time music charts are often influenced by gossip rather than by music itself.

Most of the tracks from rapper MC Mong’s new album, which was released in November, topped major music charts upon release because the news about him releasing a new album for the first time in five years dominated major web portals.

But real-time music charts are still hard to break into for new singers.

Between Jan. 1 and Dec. 12, a few unestablished singers such as Akdong Musician and Winner, who already have their own fandom after appearing in reality TV shows, made it into the top of the music charts.