An era of low growth needs strategies and focus too

An era of low growth needs strategies and focus too 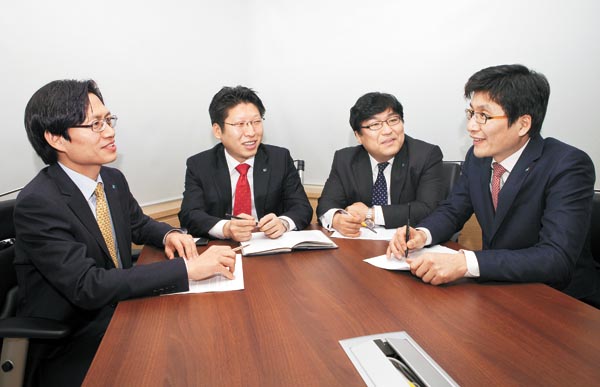 Business consultants at the Industrial Bank of Korea Kim Min-sung, Kim Hyung-gyun, Kim Tae-gyun and Cho Seung-hwan, from left, discuss what should be done next year to build business environments friendly to small businesses. By Park Sang-moon

As the world economy is expected to grow slowly next year and economic uncertainties will continue, Korea’s small and midsize companies should focus on finding a balance between sustainable management and looking for niche markets.

The government’s attempts at deregulation are not an ultimate remedy supporting these efforts, said business management consultants at the Industrial Bank of Korea (IBK).

“Businesses have to keep going forward in order to grow. If a company stops, it is fated to die,” said Kim Jae-myung, head of the business management consulting team at IBK. “We’re not simply emphasizing sustainable management, but sustainable growth. Because the overall market has shrunk, local small and midsize companies have to seek internal management stability, but at the same time have to keep looking out for new opportunities.”

In a longstanding sluggish market, in which opportunities are flat, “Companies - in particular small ones - have to focus on building a strong business foundation,” Kim added.

Five IBK principle consultants who gave detailed analyses of successes of small and midsize companies at the Korea JoongAng Daily’s Korean SMEs Going Global Series, sat down with the paper on Dec. 19 to sum up key achievements and challenges of small and midsize businesses in Korea, and give some insights into what needs to be done next year.

Q. The Korean government has said its main policy in 2015 will revolve around structural reform. How should small businesses respond to this?

A. Small businesses will have to focus on sustainable management. In a long low-growth period, businesses of all sizes cannot push new investments. But this doesn’t mean companies have to go for restructuring within their organization or businesses. Companies have to put profitability as their top priority.

It is true that companies must pursue sustainable management, but too much focus on profitability can be a threat in terms of corporate strategies by simply downsizing businesses and the organization. Even in low-growth and shrinking market conditions, there are submarkets that grow. Those companies that succeed in finding the submarkets end up surviving, and those that fail lose. That is why small businesses need to pursue substantial growth, a strategy in which they put balanced efforts into seeking both profit stability and niche markets.

There are many hardships that small and midsize businesses face. What can be done by the government to alleviate such difficulties?

There are a lot of difficulties in various areas, from planning future business strategies to coming up with effective business management skills. However, for small companies, the two most difficult things are inability to recruit quality employees and to develop new hit business items.

Even if the government said it will massively overhaul the current labor market to provide a better salary system and working conditions for low-paid and contract workers, this doesn’t necessarily mean that this policy can solve the asymmetric distribution of quality talents between large conglomerates and small and midsize companies.

Some quality talents may go to small companies, but many end up leaving them to move to larger companies like the chaebol and state-run companies that provide better pay and employee benefits. That is why small companies, which are well-prepared with good business growth potential and enough financial and policy support from the government still struggle to find quality talents and make them stay. A dearth of quality employees has hindered the growth of many small companies.

In this regard, the government may have to add or even strengthen policies [for a fairer business environment for small and midsize companies in competition with conglomerates] instead of simply taking deregulatory steps.

For instance, the government could set a rule that makes only those who have work experience at supplier companies eligible to apply for a conglomerate. Or policies like ensuring paid leaves and higher pensions could attract quality talents to small and midsize companies.

The government should continue support for midsize companies, especially during the first few years after they become midsized. Under the current system, financial and policy-wise support drastically fall off right after a company becomes mid-sized, and the support completely stops about three years later. That makes small companies want to stay compact and this doesn’t help the company stay competitive. To build a business environment where small businesses can prosper, the Korean business culture - in which conglomerates shift cost burdens to their suppliers - needs to change. This hinders small companies from investing in independent technology R&D and expanding their organizations with quality talents.

Lastly, the Korean government should maintain its business policies consistently. Korean business circles have maintained a conglomerate-oriented structure for the past 30 to 40 years - ever since the economy drastically grew - while the effort to break such a vicious circle started only a decade ago. The Korean business culture needs to stay positive about risk-taking and investing in potential. In order to realize such hopes, the government must take the initiative of taking charge of any possible financial risks.

Can fostering small and midsize companies be a solution for Korea in escaping low growth? What kind of roles can small companies play in our economy?

The significance of small businesses is emphasized more than ever, especially as the problems of a chaebol-oriented Korean economy have emerged recently. So far, most small and midsize companies have grown upon the successes of the conglomerates and at the same time been vulnerable to their failures as their suppliers. Such a conglomerate-oriented business structure in Korea hinders small businesses from standing on their own and from nurturing their unique business identity.

Now is the time when standards of competition are changing. Companies nowadays compete against each other with their business networks and strength of each industry’s ecosystem, compared to the past when one company simply competed against each other.

Many economic experts say Korea’s conglomerate-focused economy is a structural weakness that may worsen the nation’s low economic growth tendency, while the rest of the world is already in the middle of crises of low growth, low consumption and high unemployment.

About 25 percent of Korean gross domestic product comes from Samsung Electronics and Hyundai Motor, and the nation’s top 10 companies’ ranks in terms of size haven’t changed for the past decade. These show how stagnant the Korean business environment and Korean economy have been.

Fostering more small and midsize companies is the best way to overcome this weakness. When small companies get stronger independently, they will be less reliant on a small number of conglomerates, which will enhance the economy’s overall soundness.

What are the strengths of Korean small and midsize companies?

In the past, being small hindered them from growing beyond being simple suppliers. However, a small size can be a strength.

Because they are small, their owners and CEOs are able to take aggressive business decisions or try unprecedented things.

One former executive of Samsung Group got hired at a midsized company and he said he was satisfied with the company because the owners of small companies have entrepreneurship and are bold enough to take risks.

For example, some small companies are known to have developed strong R&D capability by recruiting quality talents by boosting incentives and employee benefits.

The CEOs there strongly believed that spending on R&D was part of long-term investment, and that failed R&D projects are also part of the investment. The management at Inzi Controls is known for not faulting employees for projects that went wrong so that they don’t hesitate to start a new project. Another company based in Jinju, South Gyeongsang, opened a new factory under names of all employees in a bid to give the employees a sense of ownership in the company.

In order to succeed, companies have to have a clear identity and vision of their businesses overall and each of their projects, while taking challenges when needed. However, this is relatively difficult at conglomerates because the organizations are too large and the strict organizational structure makes it difficult to go for challenges.