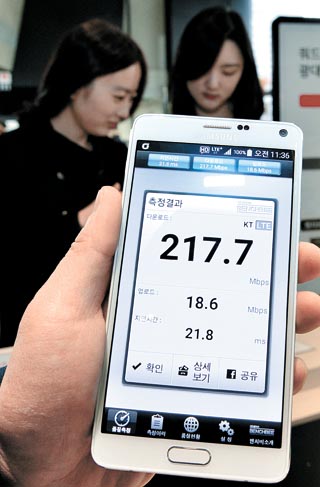 Local mobile carriers are set to launch a mobile network service next month that is four times faster than Long Term Evolution (LTE) service, known as 3band LTE-A, currently the fastest in the world.

SK Telecom, the country’s No. 1 mobile carrier, and KT, the second-largest, said on Sunday that they will assess the speed and quality of the new service with consumers and college students starting today.

LG U+ also said it will commercialize the service next month and plans to launch an exclusive smartphone for it with LG Electronics next year.

The 3band LTE-A is based on carrier aggregation technology, which combines a 20MHz bandwidth and two 10MHz bandwidths to distribute data traffic. Carriers successfully showcased the technology at this year’s Mobile World Congress in February in Barcelona.

In line with the launch of the faster network service, Samsung Electronics was first to release a smartphone, the Galaxy Note 4 S-LTE, that can provide 3band LTE-A technology.

However, 3band LTE-A service is only available in places where all the three frequencies can connect.

In order to provide the service nationwide, mobile carriers must build enough base stations that could support all three frequencies.

SK Telecom plans to expand the number of base stations from 12,000 to 26,000 by the end of March. These base stations will cover major cities across the country, as well as all subway areas in Korea.

KT and LG U+ have already prepared a commercial network for 3band LTE-A in 85 metropolitan areas and have decided to review expanding the areas of the service, after monitoring the market situations.

Some critics have noted, however, that users will not be able recognize the difference between the broadband LTE-A and the 3band LTE-A, and that releasing a new smartphone would only be an added financial drain for consumers.

“With mobile phone subscription rates reaching 100 percent, mobile carriers are competing for consumers to be No. 1 in the world,” said Lee Dong-won, a professor at the Korea University Business School. “Instead, they should invest more in increasing substantial consumer benefits, such as lowering communications costs.”

Still, SK Telecom contends that the 3band LTE-A will add to its global competitiveness in the information and communications technology (ICT) sector.

“With the launch of 3band LTE-A service, we have also come closer to 4bnad and 5band LTE-A that bundles four to five different frequencies to realize the 5th generation (5G),” said a spokesman for SK Telecom.