When it comes to the cloud, Korea’s stuck in the mud

When it comes to the cloud, Korea’s stuck in the mud

It has been more than a year since the Ministry of Science, ICT and Future Planning submitted legislation to boost the cloud computing industry, but little progress has been made. The legislation, submitted in October 2013, mainly aims to deregulate the cloud industry by allowing government bureaus and public institutions like universities to utilize cloud services.

Korea is the only country where public entities are prohibited from borrowing cloud servers from private corporations. The National Intelligence Service (NIS), in charge of electronic document security for public administrative institutions, claimed security issues according to the Electronic Government Act established in 2005.

Cloud computing maximizes efficiency by borrowing servers and software from private companies, instead of purchasing them. In other countries, the “cloud” is considered a core infrastructure for building the next generation of an information society. That’s why private corporations as well as government and public institutions are striving to establish infrastructure and adopt related technology.

But the cloud legislature hasn’t passed the Science, ICT, Future Planning, Broadcasting, and Communications Committee at the National Assembly. The committee has been occupied with other issues this year such as the broadcast law and the NIS spying.

Several non-governmental organizations and the opposition party point to parts in the law dealing with the NIS as being problematic. One clause in the legislation reads: “It is possible to have a cloud service provider report to the NIS head when infringement happens in a public cloud computing service.” This could lead to Orwellian control as the NIS is granted authorization to review the cloud servers at any time.

The Ministry of Science, ICT and Future Planning’s announcement earlier this year that said the entire clause could be dropped resumed the discussion.

“The NIS-related clause was included with the purpose of minimizing NIS intervention as written under the Electronic Government Act and Information Communications Network Act,” said Sou Sung-il, the ICT Ministry’s Software Convergence Division head. “The priority is to pass the resolution by the end of year so [the ministry] decided to make the revision.”

However, as the extraordinary session of the National Assembly came to an abrupt halt on Dec. 17 due the Blue House scandal involving Chung Yoon-hoi, a former aide to President Park Geun-hye, the cloud legislation was yet again left dangling. The ICT ministry, which aimed to have over 15 percent of public institutions utilizing cloud services by 2017, is foiled.

The biggest reason for the law’s delay is the standoff between the ruling and opposition political parties. But individual representatives’ prejudices and misunderstandings also contribute.

At a hearing earlier in December, Rep. Choi Min-hee of the New Politics Alliance for Democracy said a similar situation could arrive with the cloud as happened in the KakaoTalk censorship issue. “In government-related areas, having a server, instead of a cloud, is [safer] in terms of security concerns,” said Choi. But experts say cloud computing has a higher level of security than ordinary servers.

“Because clouds operate in a mobile environment, they record all data that comes in and out, so it’s impossible for any government or investigative agency to cut corners,” said Lee Yoon-joon, a computer science professor at Korea Advanced Institute of Science and Technology. “Having a central server and managing it, as politicians suggest, is impossible in the hyper-connected era where data usage rises exponentially,” Lee added.

Other countries are striving to improve the cloud industry in both the public and private sectors. Starting in 2010, the U.S. government has been operating a Cloud First Policy that encourages adopting the cloud system. It uses 25 percent of the federal IT budget on cloud services.

Unlike Korea’s NIS, America’s CIA is taking the lead in the country’s cloud industry. It signed a $600 million contract with Amazon in August and started to use Amazon Web Service, the global electronic commerce company’s cloud service, for information analysis.

In Japan, the Kasumigaeseki Cloud project is underway, which aims to connect cloud technology to 1,800 local governments by 2015. The UK government, which established the government cloud service G Cloud in 2012, announced in April that the country effectively cut its IT service expenses by half.

Private companies’ cloud strategies outperform the government sectors. Global companies like Amazon, Microsoft and IBM have already established cloud-based applications and the platform to create the applications, in addition to servers for clouds.

Some Korean companies are also opting for an open cloud, to efficiently cut costs and save on information storage and distribution expenses.

SM Entertainment, which manages K-pop groups like EXO and Girls’ Generation, has been using a cloud computing system since 2011. The system helps the company efficiently manage large-sized content like music videos and the large number of fans who connect from all around the world. Ticket Monster, a social commerce company, is borrowing a cloud service from another company instead of running its own server. 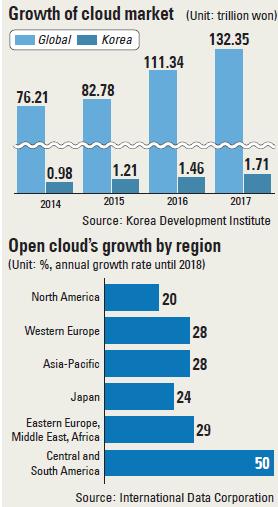 Even so, the cloud computer infrastructure in Korea is far behind that of other countries.

“The government and large corporations are afraid to let smaller private companies take a larger part in a security-related issue, and the people are also thinking clouds are dangerous,” said Choi Baek-jun, head of cloud computing service provider Tilon. “Meanwhile, Korea is becoming an underdeveloped country in the cloud industry.”

The public’s concerns about the cloud industry can affect some unexpected areas like education.

Lee Dong-joon, a 25-year-old junior at Korea University, has been struggling during class registration periods twice every year. In the fall semester, Lee was unable to access the school server and couldn’t register for a mandatory course for his major.

“All students - whether they’re in America or near the school - need to connect to the central server, but the problem is the connections happen at the same time,” said Dean Park Jin-woo of the College of Engineering at Korea University. “Having more servers may solve the problem, but it’s not easy to spend so much for the sake of accommodating class registration periods.”

Korea University isn’t alone. About 5,000 to 10,000 students fail to register for classes they need or want in most universities in Korea.

Cloud computing was first suggested by Christophe Bisciglia, a Google researcher, in 2005. Eric Schmidt, who was Google’s CEO at the time, said, the server and software can be preserved safely online and can be borrowed from time to time through the Internet. The costs saved from the process can be utilized to develop other core areas, Schmidt said.

Mark Benioff, CEO of American IT company Salesforce.com, took this idea to a deeper level. He created a service that enabled expensive corporate software such as CRM to be downloaded online. This was the start of Software as a Service (SaaS), unlike the software that was available in CD-ROMs.