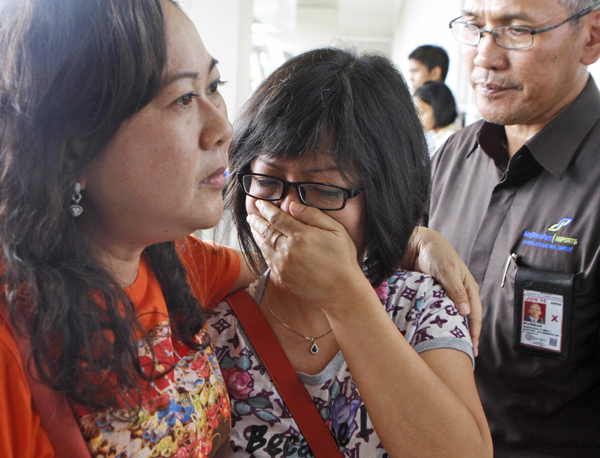 A relative of the AirAsia flight QZ8501 passengers weeps on Sunday as she waits for the latest news on the missing jetliner at Juanda International Airport in Surabaya, East Java, Indonesia. [AP/NEWSIS]

In the third air tragedy for Malaysia this year, an AirAsia plane with 162 people on board, including at least three Koreans, went missing on Sunday while flying over the Java Sea after taking off from a provincial city in Indonesia for Singapore.

Thunderstorms are common in the region during the island nation’s rainy season.

Indonesia and Singapore immediately launched a search and rescue operation for Flight QZ8501 but there was no sign of the plane more than seven hours after it lost contact with ground control.

An AirAsia statement said there were six foreigners on board - three South Koreans and one each from Singapore, Malaysia and France. The rest were Indonesians. 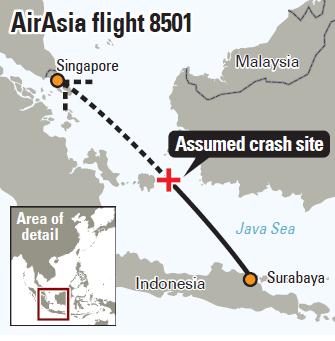 Korea’s Ministry of Foreign Affairs confirmed the names of the three missing Koreans: Park Seong-beom, Lee Kyung-hwa and Park Yu-na. It added that they are believed to be a family.

Park Seong-beom is a 37-year-old missionary who has been working near Surabaya, according to the Yeosu First Presbyterian Church in Yeosu, South Jeolla. He was believed to have been flying to Singapore with his wife, Lee, and their 11-month-old daughter Yu-na, to extend their visas.

There were two people surnamed Choi, who were seated together, but the ministry confirmed that they are not Korean nationals.

The airline said the captain in command had a total of 6,100 flying hours, a substantial number, and the first officer a total of 2,275 flying hours.

AirAsia, a regional low-cost carrier founded in 2001 by Malaysian businessman Tony Fernandes, said in a statement that the missing Airbus A320-200 was on the submitted flight route. However, it had requested a deviation due to poor weather before communication with the aircraft was lost while it was still under the control of Indonesia’s Air Traffic Control.

Weather was poor through the region over the weekend.

“By the time I was leaving downtown and coming back home on Saturday afternoon, a serious downpour swept the entire city for hours,” Oh Jan-di, a South Korean living in Singapore, told the Korea JoongAng Daily. “I’ve never experienced such torrential rain.”

AirAsia, which has a presence in most of Southeast Asia and recently India, has never lost a plane before and has a good safety record. It flies both to Seoul and Busan from Kuala Lumpur.

“We don’t dare to presume what has happened except that it has lost contact,” Djoko Murjatmodjo, Indonesia’s acting director general of transportation, told reporters. He said the last communication between the pilot and air traffic control was at 6:13 a.m. (11:13 p.m. GMT Saturday) when the pilot “asked to avoid clouds by turning left and going higher to 34,000 feet (10,360 meters).”

He said there was no distress signal from the cockpit.

Contact was lost about 42 minutes after the single-aisle, twin-engine jetliner took off from the Surabaya airport, Hadi Mustofa, an official of the transportation ministry, told Indonesia’s MetroTV. It was about an hour before it was scheduled to land in Singapore at 12:30 a.m. GMT.

At Surabaya airport, dozens of relatives sat in a room, many of them talking on mobile phones and crying. As word spread, more and more family members arrived.

Murjatmodjo, the Indonesian official, said the plane is believed to have gone missing somewhere over the Java Sea between Tanjung Pandan on Belitung Island and Pontianak on Kalimantan, Indonesia’s section of the island of Borneo.

Minister of Transportation Ignasius Jonan told reporters in Surabaya that the position was believed to be near the coast line. He said search and rescue efforts now involved the Indonesian army, the national Search and Rescue Agency as well as Singapore and Malaysia.

Air Force spokesman Hadi Tjahjanto said three aircraft, including a surveillance plane, had been dispatched to the area. Fernandes, who is the public face of AirAsia and an active Twitter user, sent out a tweet saying: “Thank you for all your thoughts and prays. We must stay strong.”

He stirred controversy earlier this year after incorrectly tweeting that Malaysia Airlines flight 370 had landed safely. The Boeing 777 went missing soon after taking off on March 8, from Kuala Lumpur for Beijing. It remains missing with 239 people.