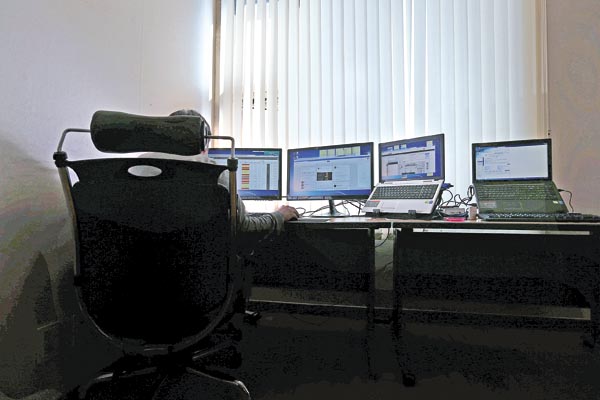 An illegal gambling site operator works in his office, a small studio apartment in Ansan, Gyeonggi. The website runs on two shifts, 24 hours every day. By Shin In-seop

Sports Toto is the only licensed sports lottery in Korea, but hardly the most popular sports gambling site. Police estimate that tens of thousands of gamblers participate in online illegal gambling, including minors, making bets that add up to billions of won per game.

Given the fact that Sports Toto players must use their real name, can only bet a maximum of 1 million won ($908) on each game and have to pay tax on winnings, illegal websites have an built-in advantage of not having such restrictions. People can use fake names and bet as much as they want, police say.

Cracking down on the operators of the illegal sites isn’t easy as most use overseas servers and change their domains every two to three weeks to dodge tracking by police. But a 38-year-old man surnamed Park approached a JoongAng Ilbo reporter earlier this year saying he wanted to come clean. He described how the rackets work.

“We’re like ghosts,” said the man, who refused to give his full name. Speaking in a small studio apartment in Ansan, Gyeonggi, Park seemed constantly on alert, showing nervousness at any sound of any sort coming from outside his house.

“Fake phones and fake bank accounts are nothing,” Park said. “These days, even the routers can’t be traced.” Park said he and fellow gambling site operators “never leave a trace” for police to find.

“Illegal gambling site operators like me are running rampant,” he continued. “People are dying to do this job because it makes money. The site I’m operating right now opened just a month ago, but already its profits reached about 100 million won.”

Park detailed the work process, explaining that websites like his start with an entrepreneur who has connections with illegal online gambling mafias in countries like Thailand or the Philippines.

The entrepreneur books a server overseas and hires an operator like himself to manage the Korean operations of the website, Park said. There’s also a business manager who promotes the site online, and a programmer who is available if the system malfunctions.

Park’s role is to authorize new members that call him by phone, which is not registered in his real name. He informs them of the address of the betting website as well as the bank account number to send bets to. The bank account is also in a fake name.

As to the number of phone calls he receives each day, Park says, “Hundreds, at the most.”

“A lot of the gamblers’ voices sound really young and those are the ones who bet 5,000 won to 10,000 won during the day time from school with their smart phones.”

Just two weeks after Park started operating his sports gambling site, users bet 170 million won in total - and the money rarely goes back to the gamblers.

“There are times when [operators] transfer money to winning bets, but most of the money stays with the operators,” Park said. “Sometimes they just shut down the website when the betting pool is large, or refuse to give winners their due, saying there was a mistake with the calculation of the odds.”

Park says illegal gamblers shouldn’t bother dreaming about hitting the jackpot. “In this business,” he said, “everything is fraudulent from A to Z.”

The way Park describes the business, it seems like he and his boss are the only winners in the illegal online gambling business. But with a deep sigh in a curtained room with four computers on his desk, Park admitted that he too is fighting high odds.

So high, in fact, he’s thinking of giving himself up to the police.

“I don’t think I can put up with this any longer,” he said. “Police crackdowns have really escalated these days.”