KT Wiz gearing up for its first season in KPB

KT Wiz gearing up for its first season in KPB 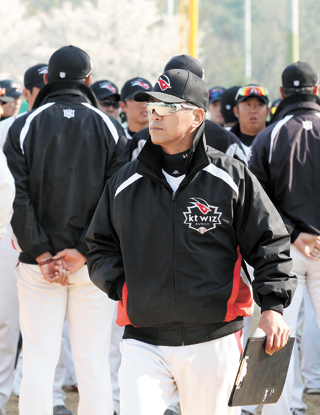 The nine-team Korea Professional Baseball (KPB) league will get more crowded next year when it is joined by KT Wiz, a new team that spent last season in the second-level Futures League.

Manager Cho Beom-hyeon of the Wiz is making his third return to the Korea Baseball Organization’s top league, but the veteran coach looked more worried than hopeful when he sat down to talk with the JoongAng Ilbo last Tuesday at Suwon KT Wiz Park.

“In reality, the spell that a manager can cast is just to wait patiently,” Cho said. “I believe magical things will happen if I trust the players and wait.”

The Suwon-based professional team was founded in January 2013. It then spent its required one year in the Futures League, where it placed third of six teams in the Northern League.

Q. What was it like to spend a year in the Futures League?

A. Time flies. We had to simultaneously play games in the second-tier league and look for players on other teams who were going to become free agents this year. We also researched other teams because we are allowed to take one player from each KPB team. With both our new and existing players, we will start from zero at spring training camp.

Are you going to fill the starting roster with free agents and players who you bought from the other teams?

We can’t play baseball with just them. The club’s stance on how athletes should be picked for starting positions is very different from that of other clubs. I’m going to assess every one of them without any prejudice, and they will face intense competition to become starters. I can’t guarantee outfielder positions to famous players such as Kim Sang-hyeon and Lee Dae-hyung.

How do you assess the team now after it ranked third among six teams in the Northern League?

Most players were in their early 20s, and they looked quite nervous even in the second-tier league. We had many errors, but they got better after the winter training session and some of them appear to be very promising.

Are you sure the team can compete in the KPB next year?

I’m still worried. Because one team rested on game day in the nine-team system, the NC Dinos could gain strength from time to time. But there will be no rest next year, and the number of games per team in the regular season will rise to 144 from 128, which is a disadvantage for teams with fewer good players, like us. So we must build up the team steadily.

Are you willing to use inexperienced baseball players even when you need to win the game?

Experience cannot be gained from training and there has to be trial and error. And a leader must know how to trust players and wait for them to show their potential.

What will the Wiz do to survive next year?

It is true that we are less competitive than the other nine teams. But we need to be the team that isn’t easily defeated.