Lakers fail to keep up with Suns’ playmakers

Lakers fail to keep up with Suns’ playmakers 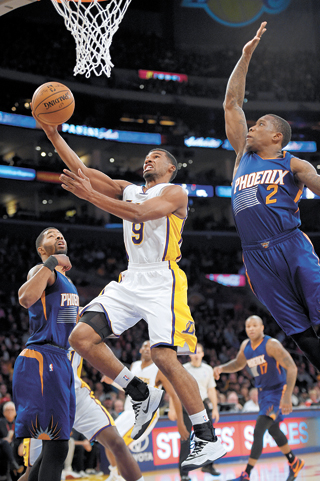 When the Phoenix Suns deploy their three playmaking guards simultaneously, even Kobe Bryant gets a bit overwhelmed.

“They’ve got one on the left, one on the right and one in the middle,’’ Bryant said. “You can’t cover them all.’’

With Goran Dragic, Eric Bledsoe and Isaiah Thomas on the floor together in the final minutes, the Suns had more than enough options to keep their winning streak rolling.

Dragic scored 24 points, Bledsoe had 20 of his 22 after halftime, and Phoenix beat the Los Angeles Lakers 116-107 on Sunday night for its sixth consecutive victory.

Thomas added 15 points for the balanced Suns, who weathered an impressive Los Angeles surge in the final minutes of their seventh win in eight meetings with the Lakers, which lost their third straight despite Bryant’s return.

Phoenix’s 13-point lead dwindled to one, but the Suns finished on a 10-2 run.

“Everybody makes runs in the NBA,’’ Bledsoe said. “We just kept our composure, hit some shots and made our free throws.’’

The Suns lost six straight before their winning streak, but Coach Jeff Hornacek’s rotation has been working particularly well.

“We just had to push the pace and keep up on Kobe,’’ said Markieff Morris, who had 12 points and seven rebounds. “We can score with anybody in this league, but we win when we play some defense.’’

Bryant had 10 points, eight rebounds and seven assists in 32 minutes during his first game back from a three-game absence to rest his aching 36-year-old body.

“My legs felt a lot better,’’ said Bryant, whose 10 shots were less than half his season average. “Just working myself back into form, but I felt fine.’’

Phoenix used its fast-break offense to grab control with a 14-3 run early in the third quarter, and then increased its lead to 13 early in the fourth. Young led a rally that included back-to-back 3s by Wesley Johnson to keep it close, and Young’s free throws made it 106-105 with two minutes to play.

But P.J. Tucker made a gritty driving layup and Morris banked in a long hook shot on consecutive possessions, and the Lakers couldn’t respond.