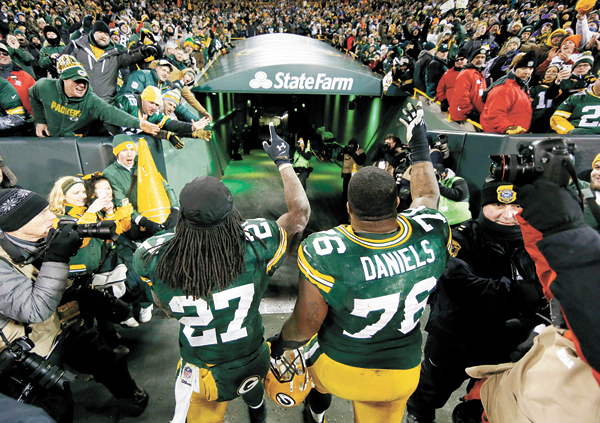 Aaron Rodgers is limping into the playoffs with a smile.

Maligned by a left calf injury, Rodgers will appreciate a week off after the win, as the Packers (12-4) earned a bye. Detroit (11-5) start the postseason at Dallas next week.

Rodgers was carted to the locker room after tossing his first score to Cobb late in the second quarter.

He hobbled back on to the field in the third quarter with the game tied at 14. He led Green Bay on a seven-play, 60-yard drive that ended with a 13-yard score to Cobb with 3:33 left in the quarter. The Packers didn’t look back from there.

Rodgers plunged forward across the goal line from 1 yard out with 8:45 left to help Green Bay regain a two-touchdown lead.

Rodgers finished 17 of 22 for 226 yards. He was out of the game for about a seven-minute stretch between the second and third quarters. In between, receiver Calvin Johnson had touchdown catches of 4 and 20 yards on consecutive drives to help the Lions roar back from a 14-0 deficit.

Detroit hasn’t won a division title since 1993. It hasn’t won a road game against the Packers since 1991. For a few moments while Rodgers was out, it looked like both those streaks might come to an end.

Instead the Packers were celebrating again at Lambeau. They finished the regular season 8-0 at home.

The Lions did draw to within 30-20 with 1:45 left after Matthew Stafford connected with Theo Riddick for a 6-yard touchdown pass. But Riddick’s 2-point conversion run failed, Tramon Williams recovered the ensuing onside kick and Green Bay ran out the clock.

The Lions head home at least with the comfort that they had clinched a playoff berth regardless of Sunday’s outcome.