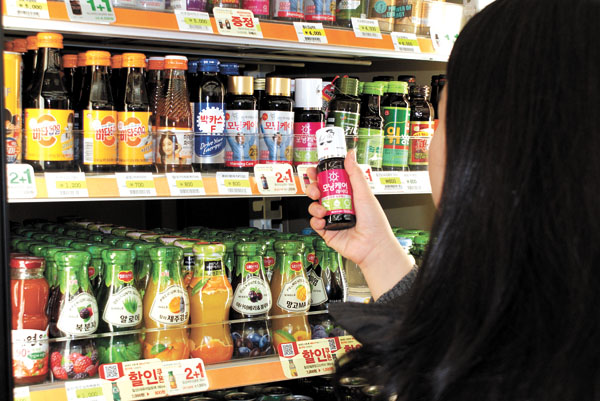 Various hangover-relief drinks displayed at a 7-Eleven store in Seoul. Provided by the company

Kim Sang-heon, a 39-year-old sales manager at a conglomerate, keeps a stash of drinks designed to relieve hangovers in his drawer at the office.

As the end of the year comes closer, Kim is busy attending a series of parties. His division is also notorious for their frequent hoesik, or after-work drinking sessions.

But he has increasingly found himself suffering after nights of alcohol binges, from symptoms such as headaches to nausea. The after effects of his heavy drinking have prompted him to seek help from so-called anti-hangover beverages.

“These days I think I drink at least two to three of these bottles per day,” he said, “because there are more occasions to drink at the end of the year.”

People like Kim are boosting the demand for anti-hangover beverages. Industry players estimate that the market size for such drinks was around 200 billion won ($182 million) this year.

Auction, a leading online retailer operated by eBay Korea, said that sales of anti-hangover beverages increased a whopping 195 percent between Dec. 1 to 25 compared to the same period last year.

The leading product is CJ Health Care’s Hut Gae Condition, which has a 43.6 percent market share, according to Nielsen Korea. The second most popular drink is Dawn 808 by Glami, followed by Dong-A Pharmaceutical’s Morning Care.

Many hangover-relief drinks contain extracts of oriental raisin tree (known as hutgae tree in Korean). They are believed to include properties that treat fever, parasitic infections, constipation and liver diseases, as well as help with hangovers.

The companies have also expanded their range of morning-after products by releasing anti-hangover beverages tailored for women, while CJ Health Care has made inroads into China, Japan and Vietnam.

7-Eleven said that its stores in the Gangnam and Seocho districts recorded the highest sales of hangover drinks among Seoul’s 25 districts. The Hongik University neighborhood ranked second.

Other people seeking to cure their hangovers turn toward more specialized alternatives such as intravenous sugar solutions. The IV contains glucose and water, and is considered by many users to relieve hangovers, though this is yet confirmed by medical specialists.

Jin Gi-wook, 39, is one man who believes in the curing effects of the IV sugar solution.

“I’ve received the injection several times after drinking nights,” he said. “It certainly works. I felt less nausea and headaches.”