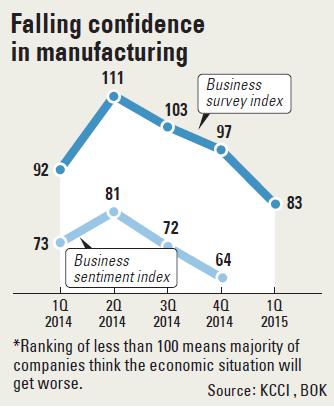 Due to stagnation in the domestic economy, the economic sentiment of companies in manufacturing did not recover in December. Korean manufacturers are in for another tough year if the slow growth continues as expected.

According to the Business Survey Index, released by the Korea Chamber of Commerce and Industry (KCCI) on Monday, the projected index for the first quarter of next year was 83, down 14 points from the previous quarter and the lowest point since the first quarter of 2013, when it marked 69. The KCCI said 2,377 companies participated in the survey.

A score lower than 100 means that a majority of companies do not think the domestic economy will improve in the next quarter. The index was at 103 in the third quarter, a drop from 111 in the second quarter.

“The country’s overall economic environment will not improve much next year for several reasons, including the slumping economies of newly industrialized nations such as China,” said Shin Kwan-ho, a KCCI spokesman.

The situation might be worse than what manufacturers have predicted.

Also on Monday, the Bank of Korea released its Business Sentiment Index, which measures how companies actually have felt retrospectively. For manufacturers in the fourth quarter of this year, the index was at 64, down eight points from the third quarter.

In general, the sentiment index is lower than the survey index.

“The stagnant domestic economy and unstable environments have affected the index,” the BOK said in a statement.

The index also showed that the outlook was better among companies that run businesses within the country, with an index ranking of 81, down by 16 points from the previous quarter. The index for export companies was 87, a decrease of six points over the same period.

By region, Jeju Island was the only area that surpassed the 100 standard, with 104, up two points from the previous quarter. It was the third consecutive quarter that Jeju hit over 100.

“The economy of Jeju is expected to stay high like it has been since the number of tourists has been consistently increasing,” the KCCI said in a statement. “But the Gyeongsang regions, including Daegu, are expected to have another tough year because the regions’ main businesses such as IT are expected to have tough competition.”

The index for Daegu and Gyeongsang was the lowest among any region, at 70.