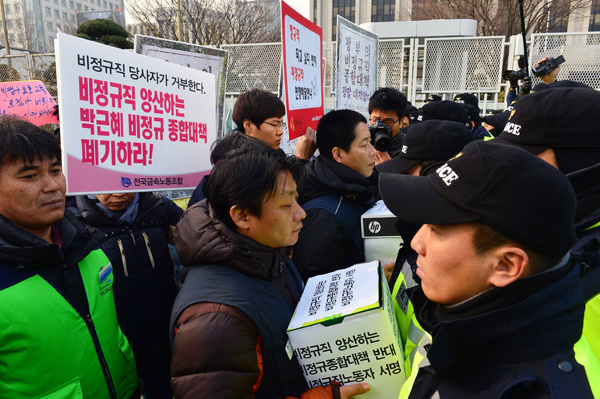 Temporary workers are blocked by police on Monday when they try to enter the Central Government Complex to protest elements of the government’s plan to reform labor laws to help contract workers. [NEWSIS]

The government’s plan to extend working guarantees for contract workers over 35 years old from two years to four is under fire from both unions and companies.

Despite a hard-won agreement on Dec. 23 by representatives of labor, businesses and the government on efforts to improve Korea’s labor market, the three parties remain far apart on the details of the plan, which was announced on Monday.

The most controversial issue is the extension of guarantees for temporary workers. The current law stipulates two years as the longest work period for contract workers once they are hired. Contracts need be renewed every two years in order to extend employment.

Under the government’s proposal, any contract worker aged 35 or older will be guaranteed a job for a maximum of four years if he or she wishes to stay with the company. 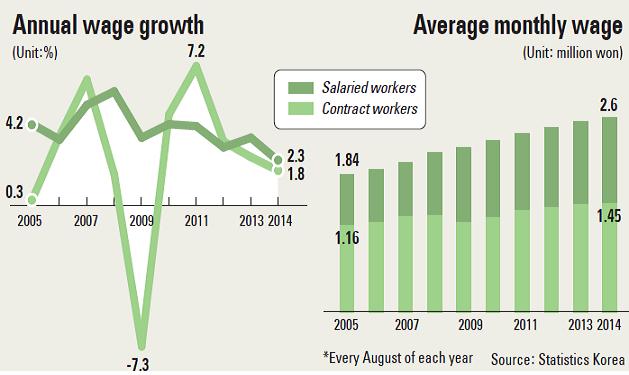 The Ministry of Employment and Labor on Monday announced its own plan of 84 measures to improve conditions for contract workers and asked the Economic and Social Development Commission to review it.

The commission, consisting of 10 members from the government, the Korean Employers Federation and the Federation of Korean Trade Unions (FKTU), on the same day launched a special committee to discuss major issues regarding labor market reforms.

The ministry’s plan requires employers to offer workers retirement allowances after three months of work and additional payments if they are not put on staff. It also calls for raising the minimum wage. Contract workers would also be allowed to seek help from a company’s union if they are treated unfairly.

The ministry said the government would start implementing those measures in the public sector first.

The government is trying to improve conditions for contract workers, targeting businesses that have been hiring temporary workers instead of staffers to cut costs, the ministry said.

“While companies in advanced countries hire temporary workers in order to secure flexibility, Korean companies aren’t like that,” said Lee Ki-kweon, the employment minister, in an interview with the JoongAng Ilbo. “Korean companies take advantage of the wage gap between salaried and irregular workers.

“It is difficult for companies to make all their employees staff workers. The latest plan is aimed at giving them the clear message that it is OK to hire temporary workers, but pay them well,” the minister said.

While the government believes that extending the two-year guarantee for contract workers will help increase the chances of them being put on staff, unions argue that it will merely create more contract workers. They said it was actually torture for the contract workers because it prolongs their job insecurity.

A group of contract workers gathered at the main entrance of the Central Government Complex on Monday to protest the government’s plan.

“The government’s plan announced today will let employers play around with seasoned temporary workers,” the group said. “Among the 84 government measures, there’s no single measure to help reduce the number of contract workers or convert them into regular positions.”

The FKTU, one of the largest umbrella trade unions, is strongly opposed to the extension of the working guarantee.

In a recent survey, seven out of 10 union members said extending the guarantee years is a “measure to produce more temporary workers.”

“The extension of the guarantee is like giving false hope to contract workers,” said Seo Young-kyo, spokeswoman of the New Politics Alliance for Democracy, in a briefing Monday. “What contract workers want is to become regular workers, not extending their guarantee years.”

Corporate representatives argue that the issue should be dealt with along issues involving salaried workers, particularly how they are paid. They say when businesses have more freedom in hiring and firing regular workers, things will improve for contract workers.

According to the Korea Employers Federation, if the government requires companies to pay retirement allowances for three-month temporary workers, employers will see a 5.4 trillion won ($4.9 billion) increase in their total labor costs.

Other measures to improve the working conditions for temporary employees include opening up access to industrial disaster compensation insurance for private tutors, parcel deliverymen, drivers of concrete-mixing trucks, insurance salesmen and golf caddies.

Contract workers have become a priority in the structural reforms the government has been pushing to secure stronger economic growth.

According to Statistics Korea, there are a total of 6.1 million temporary workers in the country, accounting for 32.4 percent of the total work force as of this year. The number shot up from around 3.6 million in 2001.

The average monthly wage of temporary workers is 60 percent that of salaried workers, a severe inequality. While regular workers got a 2.3 percent average increase in their annual incomes this year, irregular workers saw a 1.8 percent rise.