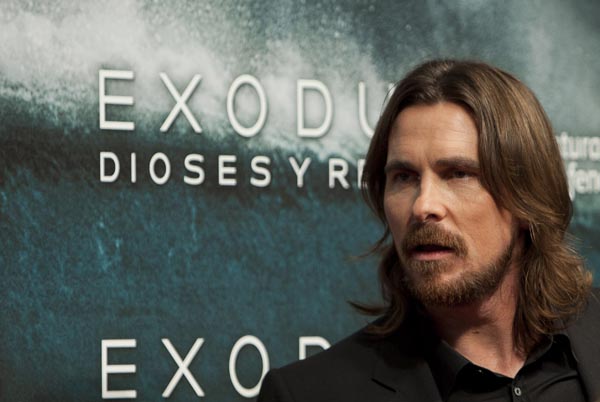 File photo of English actor Christian Bale during the premiere of the film “Exodus: Gods & Kings” in Madrid on Dec. 4. [AP/NEWSIS]

The Culture Ministry explained its decision for the first time in a statement issued a few days after the ban was announced.

It said the film put forth a reading of Egypt’s history that is at odds with the story of Moses told by the world’s monotheistic religions. Egypt is a conservative country with a Muslim majority and a sizable Christian minority.

Censors objected to the “intentional gross historical fallacies that offend Egypt and its pharaonic ancient history in yet another attempt to Judaize Egyptian civilization, which confirms the international Zionist fingerprints all over the film,’’ the statement said.

The ministry said the movie inaccurately depicts ancient Egyptians as “savages’’ who kill and hang Jews, arguing that hanging did not exist in ancient Egypt. It said the film also presents a “racist’’ depiction of Jews as a people who mounted an armed rebellion. The ministry said religious scriptures present Jews as weak and oppressed.

The statement also objected to the depiction of God as a child, which also drew criticism in the West.

The ministry said it had convened two committees - one of censors and one of archaeologists - to review the film. The committee of archeologists agreed with the decision to ban the film because it showed “a false and wrong mental image of Egypt’s history,’’ the ministry said.

Artistic works dealing with religion are often banned in the Muslim world because religious scholars argue that the depiction of prophets is unacceptable.

Such works are also often at odds with the Islamic portrayal of biblical prophets, which itself often diverges from their portrayal in Judaism and Christianity.

According to Islam, for example, Jesus was not crucified, and the prophet Abraham was ordered to sacrifice Ishmael, not Isaac.

“Noah,’’ another Hollywood biblical epic, was banned in Egypt and much of the Muslim world due to its depiction of prophets and fears it would offend viewers. Perceived insults to Islam have in the past sparked protests and deadly violence.

The United Arab Emirates also decided to ban “Exodus: Gods & Kings.’’ Juma al-Leem, of the National Media Council, told the Associated Press the movie contained historical and religious errors that are not in Islam or in the Bible.

“We respect all religions, not just Islam,’’ al-Leem said. AP