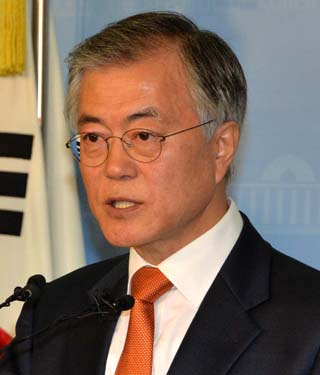 Promising to be a powerful opposition leader who will end factional infighting and bring major reform to the party, Rep. Moon Jae-in officially declared his bid for the top post at the New Politics Alliance for Democracy (NPAD), two years after his bitter defeat in the presidential election.

During a long-anticipated declaration speech, the former presidential candidate pledged to transform his party into one that will win in elections, a reference to a string of defeats his party has suffered over the past years, including his own to the Saenuri Party’s Park Geun-hye in 2012.

“I am standing here with a solemn resolution that my political career will come to an end unless I succeed in reviving the party,” said the 61-year-old lawmaker. Moon also promised he would not run in the general election in 2016 if he got elected to the chairmanship in the NPAD’s general convention on Feb. 8.

Moon said he would forgo his bid for an assembly seat in 2016 so he could concentrate on reforming the strife-stricken opposition party, whose infighting was exposed to the public this year. 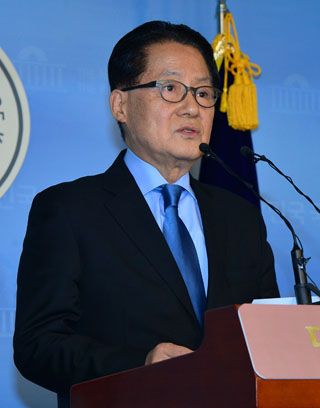 With Moon in the race, the contest will largely be a two-way match between him and Park Jie-won, a veteran politician who was chief of staff for the late President Kim Dae-jung.

The NPAD will elect its leader and supreme council members in a general convention on Feb. 8, an event considered crucial as the new leader will steer the party into the general election in April 2016.

It was speculated that Moon, considered a likely presidential candidate for the 2017 election, would aim for the top position at the NPAD, which commands the loyalty of 130 lawmakers.

Having served as the chief of staff for the late President Roh Moo-hyun, Moon heads the largest faction within the opposition, which is known as the pro-Roh Moo-hyun group.

Moon pledged he would make the nomination process for general election candidacies transparent to cut back on factional fighting.

Critics of the pro-Roh faction demanded Moon forgo his bid for the chairmanship, arguing his election would further aggravate factional strife. Some of his supporters also didn’t want him to run out of concern that it could damage a future presidential race if he failed to meet demands of his party members as the NPAD leader.

Moon acknowledged Monday that he was aware of such concerns, saying, “Those who care about me worry that it will only leave me scarred. Nevertheless, our party is in a dire state. Unless I normalize the party, we have no chance in the general election.”

Moon official joined the race a day after Park Jie-won, who claimed in a speech Sunday that he was the only candidate who could stabilize the party because he was independent of any factions.

In a clear jab at Moon, Park said the party was on the verge of falling into the hands of members of one particular faction.

Known for his seasoned political skills, Park played a crucial role behind the scenes to arrange the first summit of the two Koreas in 2000. He was the Kim Dae-jung government’s point man on negotiations for the summit. A few years later, Park was convicted for his part in the illegal transfer of $450 million to the North in exchange for holding the summit. He served two years in jail and was pardoned in 2007.

Having served as the chief of staff for the late Kim, Park is a strong advocate of engaging Pyongyang through economic aid and cooperation.