National Assembly wraps up work for the year

National Assembly wraps up work for the year 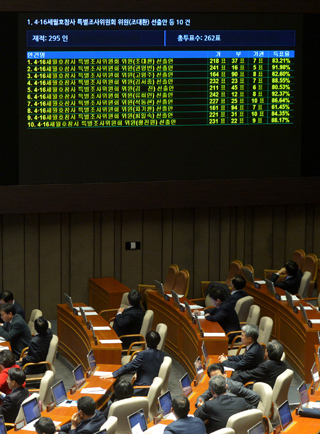 An electronic screen inside the main conference hall of the National Assembly on Monday displays the lawmakers’ votes for members of the special committee dedicated to finding the truth behind the tragic sinking of the Sewol ferry in April. [NEWSIS]

The National Assembly Monday held the last plenary session for 2014, voting for members of the special committee dedicated to finding the truth behind the tragic sinking of the Sewol ferry in April.

The session marked the last day of the extraordinary session that kicked off Dec. 15 and passed nearly 200 bills including revisions to three major real estate regulations to perk up the property market.

The special fact-finding committee for the April 16 sinking of the ferry Sewol that left more than 300 dead will consist of 17 members including lawyers, former prosecutors and law professors. Five each were named by the ruling and main opposition parties, three by relatives of the victims, two by the administrative office of the Supreme Court and two by the head of the Korean Bar Association.

Although the committee will be officially launched Jan. 1, details about its operation - where its offices will be, the number of its employees and how to pay them - have yet to be fixed. The committee is supposed to wrap up its operation within a year but could extend its life by up to six months if the members vote to do so.

Lawmakers Monday also voted to launch a parliamentary inspection into whether tax money has been wasted for the so-called natural resources diplomacy. The main opposition New Politics Alliance for Democracy previously pledged a thorough investigation into the Lee Myung-bak administration’s diplomacy overseas to secure natural resources, which the party claims misused more than 35 trillion won ($31.8 billion).

Lee’s foreign policy was intended to diminish Korea’s dependence on crude oil from the Middle East by allowing Korean public companies to participate in development projects in other regions that are rich in natural resources, such as Central Asia and Canada.

However, the ruling and opposition parties agreed not to pinpoint a specific administration in the inspection after Saenuri members opposed limiting it to the Lee government. The key issue in the inspection is whether former President Lee will be summoned for questioning.

The Assembly also agreed on the formation of a special committee to overhaul the pension system for civil servants. The committee was formed immediately and will remain operational for a maximum period of 125 days.