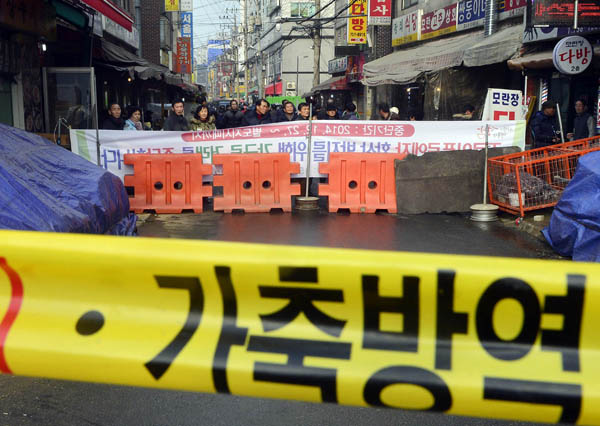 The Moran market in Seongnam, Gyeonggi, is barricaded with tape on Monday after avian influenza was detected in chickens there Sunday. Merchants volunteered to indefinitely suspend sales of all birds until the epidemic subsides. The market will reopen on Sunday to sell other products. [NEWSIS]

In response to the detection of a highly pathogenic strain of avian influenza (AI) on Sunday among chickens sold at Moran market in Seongnam, Gyeonggi, merchants volunteered to shut it down Monday, the first time it closed in its 50-year history.

They were the first such cases of AI reported in Seoul and its surrounding areas this winter. The Ministry of Agriculture, Food and Rural Affairs killed and buried infected chickens from the market on Sunday to prevent the spread of the disease.

“Our tradespeople have voluntarily reached the decision [to close the market] in fear that customers might get infected by the disease,” said Yoo Jeom-su, 61, head of a merchant’s group representing the Moran market.

Yoo added that the market will implement quarantine and sterilization measures while closed.

Agriculture authorities culled some 3,200 chickens and turkeys from Moran market on Sunday, and ordered 11 stores to cease operations.

There are 20 stores and around 30 other individual merchants selling poultry products at the market.

But a merchants’ group representing the market said it decided Sunday to “indefinitely” suspend sales of all livestock, including chickens, ducks, goats and rabbits at the market until the epidemic subsides.

The Moran market will, however, open on the following Sunday and sell other products, representatives said.

Moran market, one of the largest markets in Gyeonggi with over 3,000 store-owners and vendors of all sorts, opens six times every month, on dates with a 4 or 9 in it, like the 4th, 19th, or 24th day of the month.

Monday’s closure came two weeks after the Animal and Plant Quarantine Agency announced the detection of AI on a farm in Yangsan, South Gyeongsang, and culled at least 656 chickens and ducks in the region.