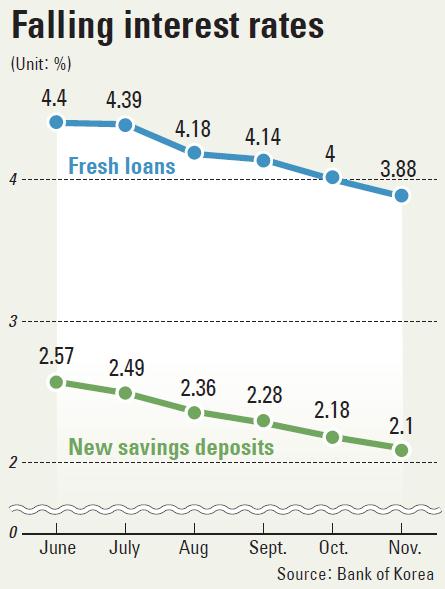 A 40-year-old office worker at a leading conglomerate, who wished to be mentioned by his family name Yoo, recently took out a loan to build a house in Yongin, Gyeonggi. Yoo wanted to move out of the busy, polluted city to a location that would be better for his two children, aged 4 and 2.

He borrowed 190 million won ($173,000) from a bank to purchase a 330-square-meter (3,552-square-foot) lot that he’d had his eye on. But after buying the land, he now has to visit the bank again to take out an additional loan to construct the two-story house he has been designing with his wife, which includes a patio and a chimney.

“We’re looking at taking out an additional 200 million won loan,” Yoo said. “That would add up to nearly 400 million won in total.”

But he said he’s not worried about the financial burden of the loan. He plans to pay back half of the debt when he sells his family’s current apartment, which is valued at about 200 million won. And thanks to the two rate cuts the central bank has made in the second half of the year, his monthly interest payments will be manageable.

A report by the Bank of Korea released on Tuesday said the interest rate for fresh loans has fallen to the 3 percent level for the first time since it began compiling the data in 1996.

In November, the average interest rate on a new loan was 3.88 percent, 0.12 percentage point less than the 4 percent average in October.

Household loans fell 0.09 percentage point from 3.64 percent in October to 3.55 percent last month. Household loans reached the 3-percent level for the first time in June, falling from 4.02 percent in May to 3.94 percent.

The falling interest rates are largely due to the central bank’s participation in the Finance Ministry-led economic stimulus campaign to prevent the economy from falling into perpetual deflation.

The central bank shaved off 0.25 percentage points on the key interest rate in August and October to bring down the rate to a historic low of 2 percent.

The key rate cut has also affected the interest rates on savings deposit, which dropped 0.08 percentage point from October to 2.1 percent last month, which is also a record low.