Banks will have to focus on mobile pay

Banks will have to focus on mobile pay 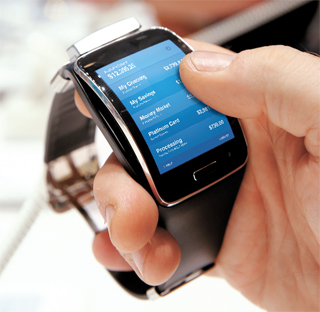 The biggest trend in the financial industry next year will be financial technology or “fintech” - technology applied to financial services such as mobile payment made through smart devices.

Many local financial companies are planning to launch their own fintech services.

NH Nonghyup will be the first local bank to use wearable devices as a banking tool.

“We plan on expanding the services to incorporate most financial services like money wiring through the smartwatch,” said Jung Jae-hyun, a spokesman of the bank.

Shinhan Bank is planning to expand TV Money service in February. In cooperation with KT in August, the company launched the service that allows various content, including movies and TV shows as well as items sold on home shopping channels on KT’s IPTV, to be purchased through a click of a remote control. The daily limit on the purchases is 500,000 won ($455). The bank recently signed a contract with Hyundai Homeshopping.

“The internet exclusive bank will be in the form of an affiliate of IBK,” said IBK President Kwon Seon-joo during a press conference held on Dec. 23.

Woori Bank is planning to expand loan products provided through smartphones next year.

In January and August the bank offered exclusively through smartphones a consumer finance loan and a jeonse or long-term deposit loan. Next year it plans to provide a “smartphone apartment loan.”

The bank is creating a separate department focusing on fintech businesses.

Banks aren’t alone in expanding their business through fintech.

Since Monday, Shinhan Card, Samsung Card and Hyundai Card started a “one-click” service allowing mobile payments that requires an ID and password of the user without any other authentication process.

Yellow Mobile has acquired 70 mobile startups in the two years since its establishment. Its sales are expected to exceed 100 billion won this year.

While strengthening its online to offline (O2O) business with JTNet, Yellow Mobile will also bring in Kwon Do-kyun, CEO of startup incubator Primer and founder of Inicis, Korea’s No. 1 online credit card processor, which covers all major Korean banks.

Kwon will join as an investor and director, while Kim Joong-tae, former CEO of Inicis, will participate in management as the CEO.

Kwon is the first generation startup founder who established the security company Initech in 1997 and Inicis in 1998 and listed them on the Kosdaq in the early 2000s.

“Based on the network, intuition and experiences that Kim and Kwon have in the card payment processing industry, Yellow Mobile plans to grow into the most competitive credit card processing operator,” said Lee Sang-hyuk, the CEO of Yellow Mobile.

Yellow Mobile has raised $100 million in capital from Formation 8, a venture capital firm based in Silicon Valley. As a mobile giant, the company is estimated to be worth 1 trillion won.

JTNet, which was established in 1993 as one of the leading credit card processing agents, has also grown rapidly in the recent five years.

The rush of Korean companies into fintech business is considered to be behind other countries.

According to a report by the Woori Finance Research Institute, Korean companies are now entering the payment and settlement market of fintech whereas other companies have moved to developing financial software, financial information analysis and establishing the foundation for financial transactions.

Just six years ago, 70 percent of the global fintech work was on developing payment and settlement service. That fell to below 30 percent as of 2013.

Last year 86 percent of the nearly $3 billion in investments in global fintech were concentrated on the development of other financial services.

But for the new technology to take off, Korean companies should be focused on security.

The public’s trust in online transactions is low. “When you look at the United States, which is the most advanced on fintech, they have made it clear who should be made accountable in case a major accident occurs,” said Kim Yeong-rin, president of Financial Security Agency.