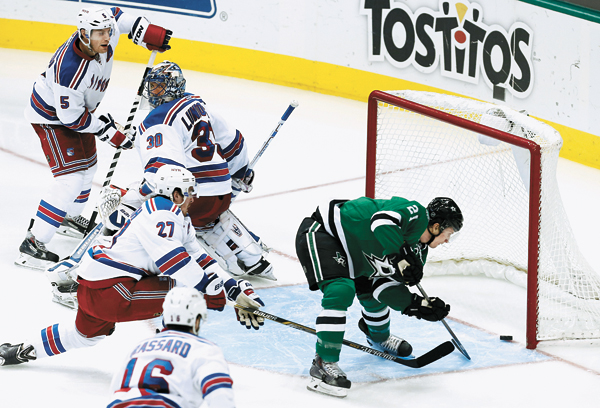 Dallas Stars forward Antoine Roussel, right, shoots a loose puck into the net as New York Rangers players look on during the second period of their NHL hockey game on Monday in Dallas. [AP/NEWSIS]

The Dallas Stars’ uphill climb toward a second consecutive playoff berth received a big boost when they earned a win their coach called their most impressive of the season.

Antoine Roussel scored the go-ahead goal 54 seconds into the second period, and the Stars broke the New York Rangers’ eight-game winning streak with a 3-2 victory on Monday night.

Dallas has won six of seven to move two games over .500 for the first time since Halloween. However, the Stars are still outside of a playoff spot in the Western Conference.

“It’s funny how things snowball in hockey,’’ defenseman Alex Goligoski said. “We had a tough time there for a while. Now, we’re finding ways to lock them down.’’

John Klingberg and Ales Hemsky also scored for the Stars.

“We’re getting a little bit more consistent every game,’’ said Stars Coach Lindy Ruff, who ended Dallas’ five-year playoff drought last season in his first year behind the bench. “We’re playing better away from the puck, which is something that, if we’re going to push our way back in, we have to be.’’

The Rangers’ winning streak tied the NHL’s longest this season but fell two games short of matching the team record set during the 1939-40 season and equaled in 1972-73. This run was New York’s longest in 40 years.

J.T. Miller and Kevin Hayes scored for the Rangers.

Kari Lehtonen stopped 28 shots and earned his 15th victory of the season. He got help from one post, which defenseman Kevin Klein hit, and when Dallas defenseman Jyrki Jokipakka cleared a puck from the goal line.

New York’s Henrik Lundqvist, who made 23 saves, lost for the first time since Dec. 1.

“It doesn’t matter how many games you win. When you lose, you’re disappointed,’’ Lundqvist said. “You have an opportunity to get another win, to get more points.’’

Roussel’s winner came when he gathered the rebound of a wide shot by Ryan Garbutt. He backhanded it into the vacant side of the net for his eighth goal.

The Stars sought to match the Rangers’ high-octane skating.

“We knew they’re a good skating team, but I think they surprised us a little bit,’’ Lehtonen said. “Then we adjusted.’’

The teams traded power-play goals early in the first period. Miller broke in and beat Lehtonen over his left shoulder following a neutral-zone outlet pass from Mats Zuccarello. His fifth goal of the season at 5:57 came while Jason Demers was off for hooking.

Five minutes later, rookie Klingberg sailed a puck through traffic and past Lundqvist’s blocker at 9:02. His previous attempt struck a Rangers player’s stick and bounced right back to him just inside the blue line,

Tanner Glass was serving a tripping penalty at the time.

“I’ve seen us be better, but I don’t want to take away anything from Dallas,’’ New York Coach Alain Vigneault. “They played a real strong game.’’

Rangers defenseman Marc Staal had a hand in goals for both teams exactly a minute apart late in the first period. He unwittingly knocked a centering backhand from the corner by Hemsky through the sliver of space between the left post and Lundqvist’s left skate to put Dallas ahead 2-1 at 15:46.

At the other end, Staal wristed a shot from just inside the blue line that Hayes deflected in at 16:46 for his fifth goal.

The Stars improved to 11-2-1 when leading after two periods.