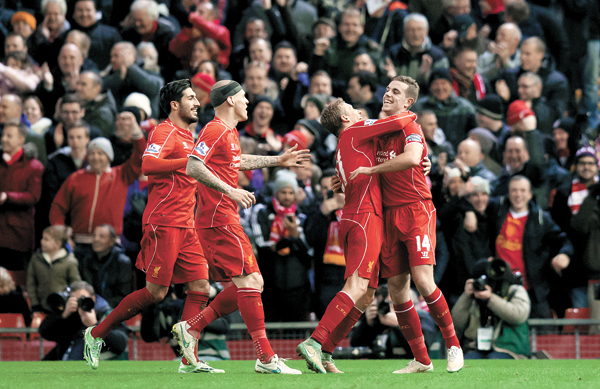 Liverpool’s Jordan Henderson, right, celebrates with teammates after Swansea’s Jonjo Shelvey scored an own goal off Henderson’s corner during their English Premier League match against Swansea at Anfield in Liverpool, England on Monday. [AP/NEWSIS]

Midfielder Ki Sung-yueng of Swansea City was excluded from the starting roster for the first time this season. Jonjo Shelvey and Leon Britton played midfield but they were not secure enough, often letting Liverpool break through.

Ki replaced Britton in the 66th, when his team was trailing 3-1, but could not reverse the game after all.

After Alberto Moreno put Liverpool ahead in the 33rd minute, Lallana’s first goal came with a bit of luck as Swansea goalkeeper Lukasz Fabianski hit a clearance straight at the midfielder and the ball bounced off his shoulder and looped into the net to make it 2-0 in the 51st.

Gylfi Sigurdsson replied for Swansea just a minute later, but Lallana restored the two-goal cushion by going around two defenders and slotting a low shot inside the far post in the 61st.

Shelvey headed in an own-goal in the 69th, giving Liverpool four goals in a game for the first time this season. Brendan Rodgers’ team had scored just nine goals in as many home Premier League matches this season as they struggled to replace Luis Suarez and the injured Daniel Sturridge.

Liverpool climbed above Swansea into eighth, with both on 28 points - five outside the top four Champions League spots. And Rodgers may have found an effective system going into the new year, as he once again played without a recognized striker. Lallana partnered Raheem Sterling and Philippe Coutinho in a front free, with Mario Balotelli again on the bench. Captain Steven Gerrard was also rested, but Liverpool constantly looked a threat going forward.

“It’s something we’ve been searching for all season,’’ Rodgers said. “Obviously, we’ve lost some players, and I’m getting to find out about players. ... We put a lot of work into finding a way that will allow us to get that creativity back.’’

Moreno’s energy created the opening goal as he became Liverpool’s 10th different scorer in the league at Anfield this season. The defender started the move on the left and then charged into the box to turn a cross from Jordan Henderson into the goal despite Fabianski getting a hand to it.

Simon Mignolet was back in the Liverpool goal, but it was his counterpart who made a mistake when his clearance cannoned into Lallana and back into the empty goal.

“I can’t remember where it hit me, but it ended up in the back of the net, so I’ll take that any day,’’ Lallana said.

But Rodgers’ side allowed Swansea to get back into it immediately, when weak headers by Javier Manquillo and Mamadou Sakho allowed Sigurdsson to pull one back.

A manic three-minute period ended with Sterling hitting the post at the other end from an immediate counterattack.

There was nothing lucky about Lallana’s second as Coutinho’s backheel allowed him to dance his way through the defense to fire past Fabianski.

Shelvey’s header past his own goalkeeper from Jordan Henderson’s corner then put the game beyond reach.

“We made too many mistakes today to really warrant anything from the game,’’ Swansea Manager Garry Monk said.