Construction companies secure orders worth $66B

Construction companies secure orders worth $66B 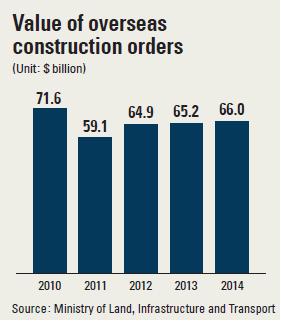 Korean builders have reached the second-highest value ever for overseas construction projects won in a year, the Ministry of Land, Infrastructure and Transport said on Tuesday.

The ministry said that Korean companies have won overseas projects worth $66 billion this year, the second-highest amount ever after the $71.6 billion worth of orders obtained in 2010. This year’s figure is short of the government’s goal of $70 billion, but builders’ overseas orders were still 1.2 percent higher than in 2013, when they bagged $65.2 billion.

“For this year, there were some barriers such as political unrest in the Middle East, the sharp fall in the oil price and the Ebola virus outbreak,” the ministry said in a release. “However, due to the active efforts of Korean companies to expand overseas and support from government support teams, we made valuable results and maintained progress.”

The ministry highlighted that many Korean companies have worked together to win orders by forming consortiums or form joint ventures, and that $26.6 billion worth of orders were secured in this format, accounting for 40 percent of total orders won. Last year, only 21 percent, or $13.5 billion worth, of orders were won by collaborations between companies.

By region, the Middle East, a traditional gold mine for Korean builders, was again the place where most companies secured orders. The ministry said that $31.3 billion, or 47.5 percent of total overseas orders, were from the Middle East. Asia was the second-largest market, with $15.9 billion worth of orders.

Orders from Africa and Europe, and Central or South America, reached a record high - local builders won $8.95 billion and $6.75 billion worth of orders, respectively.