Economic chiefs see 2015 as a year of opportunities

Economic chiefs see 2015 as a year of opportunities 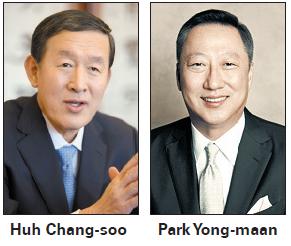 Leaders of the nation’s major economic institutions said that 2015 will be a tough year for businesses as they deal with obstacles including the falling price of oil, depreciating yen and slow growth of newly industrialized countries.

In a New Year’s address on Tuesday, they said conglomerates and mid- and small-size enterprises should focus on finding opportunities amid the crisis and encouraged businesses to make more investments to improve their global competitiveness.

“We have already seen so many predictions saying that the country’s economy in the next year will have a difficult time,” Huh Chang-soo, chairman of the Federation of Korean Industries, said in a statement.

“But we have gained experience from similar crises in the past, including falling international oil prices and a low Japanese yen, and used them as opportunities to improve. At times like this, the overall economic environment for exports is getting worse, but we should consider this as an opportunity to improve the quality of our products and marketing strategies, and to find new business opportunities.”

Huh emphasized that making investments in new businesses will be the only way to overcome slow economic growth, and added that the government and companies need to continue to launch new programs that can help conglomerates and small venture firms grow together.

“As the [Park Geun-hye] administration promised, the government needs to keep instating policies to remove regulatory barriers that have been interfering with companies’ expansion,” he said. “Once again, next year should be a year in which all economic institutions can stick together for the nation’s economic recovery.”

Park Yong-maan, chairman of the Korea Chamber of Commerce and Industries, sees next year as a “golden time” because there is a high likelihood that the domestic economy can overcome the crisis.

“The year 2015 will be very important for us because we desperately need to find out what we need to do to join the ranks of advanced countries,” Park said in his address on Monday.

“We need to overcome many obstacles including the low birthrate, the aging society and competition between advanced nations and newly industrialized countries, and hope to get out of secular stagnation. In order to sustain growth, the country needs to reform its overall economic structure.”

Park also added that the conglomerates leading the country’s economy must change their management style to create an environment in which workers can easily communicate with each other and make important decisions together.

“By expanding investments, companies will be able to develop more innovative products and technology such as three-dimensional printers, Internet of Things and artificial intelligence, and can become a frontier in the global market, which will help the nation’s industries grow and create more jobs for younger generations,” Park said.

“It will be a tough year for companies,” Han said. “But this year, Korea has sealed free trade agreements [FTA] with five nations including China and Canada, which has provided us with more business opportunities that can potentially make enormous profits and we can move beyond the country’s domestic market value of $1 trillion. It means that more difficult challenges and competitions are awaiting us and we need to take notice of the situation.”