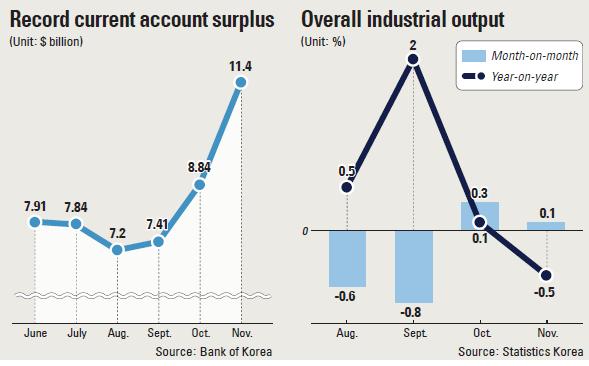 Several reports released Tuesday showed that the economy is staying afloat but is clearly on a weaker growth path.

Korea’s current account surplus for November broke a new record at $11.4 billion while overall industrial output, which includes production by manufacturers and mining as well as the services industry, succeeded in posting quarterly growth for the second consecutive month.

One of the most positive signs was that facility investments last month surged 13.1 percent compared to October’s. That was a turnaround from a 4.5 percent decline in October.

But when looked at more deeply, some signs show the economy is in a gradual descent. And unless new factors turn around the situation, it seems that the current momentum will continue through early 2015.

According to the Bank of Korea on Tuesday, the $11.4 billion current account surplus in November grew nearly 30 percent from the previous month’s $8.84 billion. It broke the $11.1 billion record that was hit in October 2013. Korea’s surpluses have continued for 33 consecutive months.

Additionally, the accumulated surpluses from January to November, totaling $81 billion, are already close to this year’s target of $84 billion. They have already exceeded the record annual surplus set in 2013 of $79.9 billion.

But this achievement did not result from an outstanding performance in exports. In fact, it was largely thanks to a significant drop in imports caused by falling international crude prices.

Exports last month shrunk 4.8 percent compared to a year ago to reach $50.2 billion while imports tumbled at a much faster rate of 10.4 percent to $40 billion. This was the sharpest drop that imports have seen in nearly two years. As a result, the goods account surplus last month was $10.2 billion.

“Customs-cleared imports fell sharply because the processing trade in China has contracted while international crude prices have fallen,” said Noh Choong-shik, a BOK official in charge of international balance of payments.

Even when compared to the previous month, exports shrunk 3.4 percent. The falling exports come amid a contracting global economy. Other than the U.S. economy, which has been on a solid recovery path, other major markets including China and Europe have been decelerating.

On a positive note, exports to South America surged 46.4 percent year-on-year in November. This was a sharp jump from a 5.5 percent increase in October. Exports to the Middle East also improved, going from 9 percent in October to 13.4 percent last month.

On the contrary, exports to Europe, China and Japan continued to fall. Europe’s decline last month was nearly the same as in October. While exports fell 8.6 percent in October, in November they declined 6.8 percent. Exports to China reversed themselves from a 3.3 percent increase in the previous month to a 3.3 percent decline the following month.

In the case of Japan, exports really tumbled. While they only fell 3 percent in October, in November exports plummeted more than 25.3 percent year-on-year.

By products, most major export goods such as automobiles and mobile devices improved.

Overall industrial output last month grew 0.1 percent from the previous month. This was the second consecutive month that output has grown.

The increase was attributed to a turnaround in the output of manufacturing and mining, which posted a 1.3 percent increase compared to the previous month. This was the sharpest monthly increase since July when it grew 1.6 percent.

In October, the industrial output declined 1.7 percent and in September it hardly moved with a 0.1 percent increase.

The manufacturing and mining output was led by an increase in automobiles, which saw a 9 percent month-on-month increase, and semiconductors, which grew nearly 3 percent.

Consumer spending seemed to be improving as retail sales went up 1.9 percent led by a 7.8 percent hike in sales of durable goods and automobiles. This was an improvement from October’s 0.1 percent decline and a 3.4 percent drop in September.

Facility investments improved significantly. In November, companies’ investments in facilities including production plants surged 13.1 percent. The previous month it was down 4.5 percent.

The government greeted the improvement in industrial output as well as consumer spending and facility investment with optimism.

“Considering how bad it was in August and September, it is not that the economy is fully buoyant but as industrial output has bounced back and retail sales have grown, improvement in momentum is spreading,” said Kim Byung-hwan, a director at the Finance Ministry. “Retail sales increased largely thanks to the sales of smartphones and automobiles.”