Sewol sinking turns into a day of infamy

Sewol sinking turns into a day of infamy 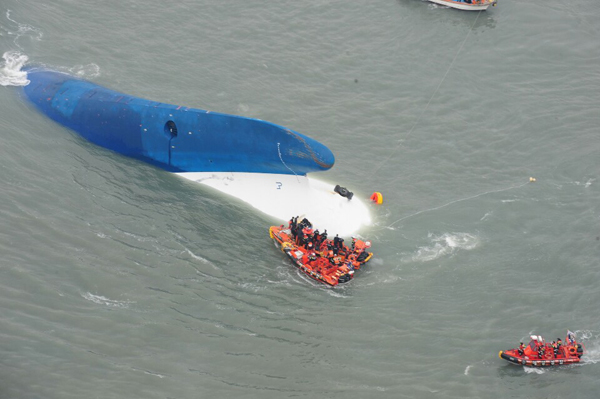 When a ferry from Incheon to Jeju Island had an accident in the waters off Jindo County shortly after breakfast on April 16, the first news from the scene was the best that could be hoped for: all of the passengers were rescued.

Five hours later, a new reality came to light: most of the passengers were doomed. In fact, only 172 out of 476 people on board survived. As of now, 296 are confirmed dead, most of them 16-year-olds on a school field trip. Nine people are still unaccounted for.

The truly stomach-churning news only dribbled out later, and it didn’t involve those who died, but why, how and who was to blame. There was more than enough blame to go around. The notoriously shady family that ran the 20-year-old, secondhand ferry probably overloaded it and got permission to make dangerous renovations. Inspections were a joke. The captain and most of the crew abandoned the ship in a heartbeat. The Coast Guard didn’t bother getting their boots wet saving anyone. A $143 million Navy rescue ship that may have helped was sitting idle because of corruption in its procurement.

The undertow of underdeveloped-nation greed, cynicism, impunity and favor swapping that Korea has been trying to outswim for decades was shown to be the main current of Korean life. The fate of the Sewol proved that 18 years after being accepted into the OECD, Korea could hardly call itself a law-abiding, developed nation - and maybe never will. Perhaps “advanced emerging market” is as far as it will ever get.

The Sewol sinking was not merely the most tragic loss in decades. It was the biggest shame, a Korean day of infamy. Hundreds of innocent schoolchildren lost their futures not because they boarded a third-world deathtrap last April - but by being born into one 16 years earlier.