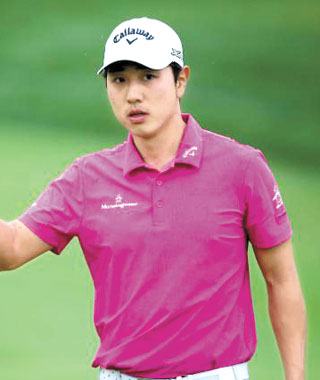 Bae Sang-moon, who won two PGA titles last season, is on the brink of having to suspend his career in order to complete military duty.

Earlier this month, the 28-year-old golfer applied to the Military Manpower Administration (MMA) for permission to stay in the United States for another year.

But he was notified Tuesday that his request to extend his permission to stay abroad had been refused.

The MMA denied Bae’s request because he had stayed in Korea for 133 days in 2013 - though not consecutively - after he postponed his military duty to attend graduate school at Sungkyunkwan University.

Since Bae’s request was denied, he must return to Korea within 30 days to begin his military service.

As there is no clear standard for the exact period of time a person with permanent residency in a foreign country can stay overseas, Bae and his legal agent are considering filing an administrative lawsuit to extend his overseas travel permission.

Men aged between 25 and 37 are required to ask for permission from the head of the MMA in order to postpone their military duty, which is mandatory in Korea, and to stay longer abroad.

Bae, who debuted on the PGA in 2012, acquired permanent residency in the United States in January 2013.

The current law stipulates that potential conscripts are entitled to request an extension of their overseas travel for up to three years if they have the right to stay permanently in a foreign country and have lived there for a year.

Before December 2012, when a person acquired permanent residency and spent at least a year in a foreign country, they were exempt from military duty.

But the law was revised after the footballer Park Chu-young secretly avoided military duty after staying in Monaco for a year.

In the worst-case scenario, the 84th-ranked golfer, which is the highest among South Korean players, might choose to attain citizenship in the United States.