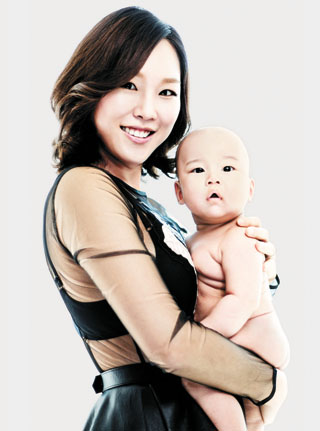 Seo Hee-kyung holds her 4-month-old son Do-hyeon in her arms. By Ko Sung-jin

Seo Hee-kyung, the 2011 LPGA Rookie of the Year, has decided she will return to the U.S. tour after taking time off to give birth.

The 28-year-old Seo married Guk Jeong-hoon, a banker, last November. She gave birth to her son, Do-hyeon, in August. She left the LPGA in April ahead of giving birth and spent time relaxing instead of swinging golf clubs.

It took eight months for Seo to return to work. She began her physical training this month and is spending two to three hours a day working out. She gained 16 kilograms, or 35 pounds, during her pregnancy but is now back to her normal weight.

“The clubs were too heavy when I first resumed training,” said Seo. “But I soon got used to them and I feel much lighter now.”

Seo can now return to the LPGA whenever she wants.

Female athletes usually reserve marriage, childbirth and child-rearing toward the end of their careers. Seo said she was afraid of risking her profession but remembers the last several months as time well spent reflecting on her life.

“As a golfer, I just kept moving forward like a racehorse without taking the time to look at my surroundings and think about how happy my life is,” said Seo.

“But marriage and my son completely changed my perspective on life. My happiness and my family and friends’ happiness all come first now.”

Her son means everything to her, she said.

“The happiest moment of my life is when I’m holding my son in my arms,” said Seo. “I just forget about all of my worries.”

Seo made the difficult decision to leave her family behind and go back to the United States thanks to her husband, who she called her most ardent supporter.

“I was advised that I should make decisions that I won’t regret in the future,” she said. “It is never easy to return to the tour because of Do-hyeon, but I thought I would regret it if I don’t go back.”

A number of golfers have raised children while also pursuing their sporting careers. Juli Inkster, for example, married in 1980 and debuted in the LPGA in 1983. She gave birth to her two daughters, Hailey in 1990 and Corey in 1994, but also prevailed in the tour, winning 31 titles throughout her career. She even went on to achieve a career grand slam in 1999.

Catriona Matthew made headlines when she won the Ricoh Women’s British Open in August 2009, just 11 weeks after she gave birth to her second daughter, Sophie.

But those cases sound unlikely to South Korean golfers, given the social pressures on female athletes, which can make them change their minds about pursuing their professions while bringing up children.

“It is natural for mothers to spend more time with their children and less on practice,” said Park Won, a commentator at J Golf. “It usually makes them underperform in the tour and many of them give up after all.”

That is also a concern for Seo, but she claims her son is the reason she returned to golf.

“I know that I can’t spend much time with Do-hyeon when I come back,” the golfer said, adding that she plans to focus solely on her professional development when on the tour.