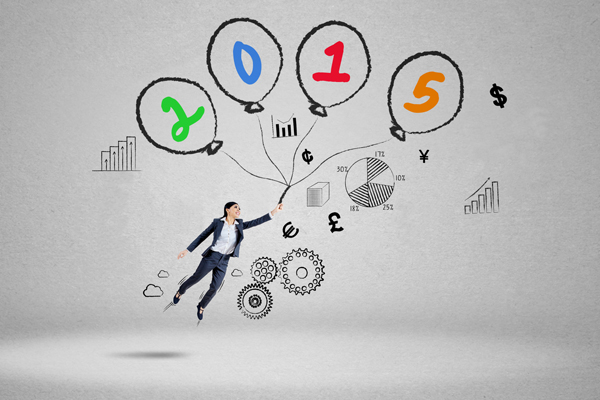 For 2015, the Korean government’s main goal is to ease regulations and boost financial benefits to revive the domestic economy. The new measures that take effect at the start of the year are mainly geared toward people in mid- to low-income groups.

The new policies aim to heat up the frozen real estate market by lowering income taxes paid by landlords and make it easier for low- and middle-income families to take out loans in order to pay their excessively high housing prices.

To encourage spending, the government raised the minimum wage by 7 percent to 5,580 won (about $5), and will give bigger subsidies and tax waivers to companies hiring women and older workers.

People who own two houses and make 20 million won or less per year by renting out property will be exempt from income taxes through 2016. Starting in 2017, landlords who fall into this category will be taxed separately for the income from their full-time job and the income they make from renting out apartments or houses.

Owners of three or more houses, or those with one house worth more than 900 million won, will still have to pay income tax at the current level.

The government is extending a policy to provide tax returns of up to 40 percent on spending on check cards and cash receipts in 2015, up from 30 percent this year. The goal of the measure is to curb people’s excessive spending on credit cards, which is driving up household debt.

As of Jan. 1, the policy will be extended through the end of 2016 in a bid to boost consumption.

Starting Jan. 1, foreign employees at global companies headquartered in Korea will pay a flat 17 percent income tax, regardless of their salary. To be eligible, a company must submit a business strategy to the government and set up personnel management and R&D departments. The set income tax rate will apply to all foreign companies in Korea by the end of 2016.

The government expanded subsidies for households with children and raised tax returns for money spent on infertility treatments.

Starting January, households with an annual income of less than 40 million won are eligible to receive a government subsidy of up to 500,000 won per year for each child younger than 18. To be eligible, a family can own up to one house, and have assets - real estate, financial and disposable - worth less than 140 million won.

The goal of the subsidies is to boost the birthrate, which has remained at the lowest level among Organization for Economic Cooperation and Development (OECD) members for the past 14 years. Korean women give birth to an average of 1.2 babies in their entire lifetime, lower than Japan’s average of 1.39 babies. The OECD average is 1.7.

After raising the duty-free purchase limit from $400 to $600 in September, the government also decided to levy a 40 percent surtax on goods worth more than $600 if they are brought into the country but not reported to the tax authority. The current surtax is set at 30 percent of the value of goods purchased. If a traveler is caught violating the duty-free limit three times in a period of two years, he or she will have to pay a 60 percent surtax as punishment.

The government will launch a program on Friday to help job seekers, low-income families and renters pay their housing bills and prepare lump-sum deposits for jeonse houses.

Under the new jeonse program, a person can take out a home loan at a super low interest rate of about 2.7 percent, down from the current 3.3 percent. The interest rate depends on the person’s income and the size of the jeonse deposit. A couple with a combined annual salary of less than 20 million won can take out a loan at a 2.7 percent rate for a lump-sum deposit of 50 million won or less.

Low-income families and young job seekers can also borrow money to pay their monthly rent. The beneficiaries can borrow 300,000 won every month for up to two years with an annual interest rate of 2 percent. The monthly rent must be less than 600,000 won on a 100 million won deposit.

The government hopes to boost the number of transactions in the real estate market by making homes cheaper, in part by setting a limit on the amount that a real estate agent can charge for commission.

Any adult who is not a home owner can apply for a new unit starting March, as opposed to the current rule that says only heads of households can apply.

The government is also planning to expedite the screening process for applicants by quickly approving people based on the amount of money in their bank account. The application process for a government-built unit smaller than 85 square meters (914 square feet) will also be easier. It will only require three steps next year, down from the current 13. The process for privately-built apartments will take only two steps.

Starting in 2015, people paying monthly rent will get larger tax returns. The rule has been changed to give back 10 percent of the total monthly rent paid per year, with a ceiling of 7.5 million won. Currently, renters receive returns of 60 percent for the amount of one months’ rent.

Starting Jan. 1, the minimum hourly wage will be increased to 5,580 won per hour, about 7 percent higher than the current 5,210 won. This translates into a minimum daily income of 44,640 won for a person in Korea who works eight hours a day, and a minimum monthly income of 1,166,220 won when working 40 hours a week. The minimum wage rise applies to everyone working in Korea, regardless of nationality or job. However, employers are allowed to pay 10 percent less than the minimum wage to trainees who are in their first three months of employment at a new job.

The government has decided to extend a policy that allows companies at which 23 percent of all employees are 60 or older to get government subsidies on wages amounting to 180,000 won per person every three months. The subsidies were set to end this year, but the Finance Ministry decided to continue the policy through 2017 to keep raising the employment rate of older people.

After the tragic death of a security guard at an Apgujeong apartment complex, the government decided to include security guard companies in the 180,000 won subsidy plan if at least 12 percent of the guards they employ are seniors.

Companies that extend the contracts of temporary female employees who are pregnant or want to take child care leave by making them permanent workers will get employment subsidies of 7.2 million won per person per year, up from 5.2 million won this year.

Starting January, the government will give companies subsidies of up to 10.8 million won per person per year if they implement the peak wage system, under which the employer extends the employees’ retirement age but shortens their working hours and lowers their salary. Currently, the government offers a subsidy of 8.4 million won per year per person for the peak wage system.

The Korean carbon credit exchange market launches Jan. 1, allowing local manufacturers to buy or sell carbon emission credits. Each company was assigned a carbon dioxide emission quota on Dec. 1, which gives an emissions limit for the next three years. If a business will have higher emissions than its quota, it must buy the credits from another company. Emissions amounting to 1.69 billion tons of carbon dioxide were given out to 525 local manufacturers, including 84 petrochemical companies, 40 steelmakers and 38 power companies.

A person who purchases a hybrid car with that emits 97 grams of carbon per kilometer or less can apply for a 1 million won government subsidy. Models covered by the plan include the Hyundai LF Sonata Hybrid, Toyota Prius and Prius V, Lexus CT200h and Ford Fusion Hybrid. New hybrid car owners can apply for the subsidy online at hybridbonus.or.kr after registering their car with the local government. The subsidy applies to cars sold starting Jan. 1.

Cigarettes, which used to cost 2,500 won per pack, will be 2,000 won more expensive as of the new year, costing about 4,500 won. The government hopes the price hike will encourage more Korean smokers to quit in 2015, and will also allow the government to collect more taxes.

Also on Jan. 1, smoking will be banned at more public locations such as restaurants, cafes and PC rooms. Business owners who secretly allow people to smoke can be fined up to 1.7 million won, and smokers can be fined 100,000 won.

Starting in 2014, importers can bring rice into the country after paying a 513 percent tariff. In the past, the companies were required to have a license from the government in order to bring in rice. However, even though the tariff is set at 513 percent, a deal with the World Trade Organization says that Korea must import 408,700 tons every year under a much lower 5 percent tariff.

To prevent confusion in the market, sales of mixed rice is strictly prohibited. Previously, retailers mixed Korean and foreign rice, and also combined rice produced in different years. Retailers who do not comply with the new rule can be sentenced to three years in prison, or fined of up to five times the price of the rice that was sold illegally.