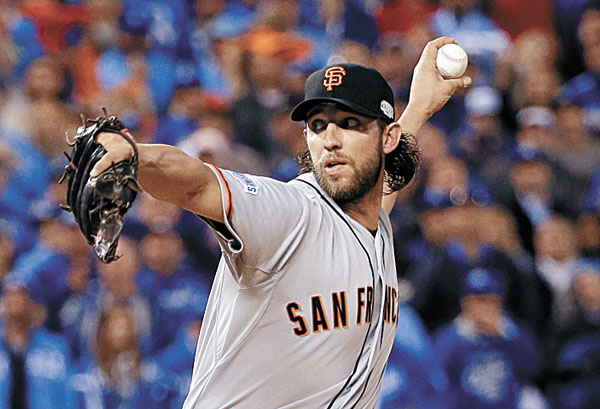 Madison Bumgarner sat in the outfield alongside Jake Peavy before Game 7 of the World Series and told his teammate exactly what needed to happen: Tim Hudson would work a few innings and get the ball to Bumgarner, who would hand it off to the bullpen to finish the championship.

Peavy quickly offered his own prediction that Bumgarner would end it himself.

That’s exactly what MadBum did, following up a pair of World Series wins with a save at Kansas City to close out San Francisco’s third title in five years and cap a brilliant postseason that made him a household name - or, at the very least, a household nickname. He is the 2014 Associated Press Male Athlete of the Year.

“I was sitting in the outfield with Madison and he was asking me how I thought this game was going to play out,’’ Peavy recalled this month. “I said to him: ‘Madison, when you get the ball, you’re not coming out of the game. You’re the best guy we’ve got.’ ... He said, ‘Man, that’s exactly what I hoped you would say’ and exactly what he wanted. He just needed some confirmation, somebody to believe in him as well. I said, ‘Fight for that ball, man,’ and what he did will go down in the ages as the best ever.’’

The shaggy-haired left-hander who takes as much pride in his pitching and durability as he does his deep North Carolina roots, Bumgarner became October’s biggest star for a San Francisco club that really needed one during another improbable World Series run.

After months of the same questions about his well-tested left arm, Bumgarner made light of it all.

He had just thrown 270 innings, including 21 with two wins and a save in a World Series that went the distance against the fellow wild-card Royals.

“I got a splinter in my finger the other day. That was kind of painful,’’ Bumgarner quipped, sounding perfectly serious. “Fortunately, it was on my right hand.’’

Bruce Bochy’s 25-year-old workhorse has earned the manager’s trust that he will speak up if anything ever feels off with his arm. Otherwise, he’s going to keep getting the ball.

With that tricky cross-body, three-quarters delivery - resembling a sling shot - Bumgarner shows hitters the ball briefly with an outstretched arm before that rapid release and suddenly it’s right there leaving batters baffled.

On two days’ rest in Game 7, that day he sat with Peavy in Kansas City, he pitched five scoreless innings of relief in a 3-2 win.

Only after that would Bumgarner acknowledge he might need a mental and physical break at last after tossing a record 52 2-3 postseason innings.

Pitching Coach Dave Righetti began fielding inquiries before the World Series began about whether Bumgarner had the chance to make three appearances. He knew it could happen, though it wasn’t exactly planned.

“You don’t realize when you’re in the middle of the eye, ‘Wow, what this guy’s doing is so special,’’’ Righetti said. “That really hasn’t been done in years. ... When you’ve got a healthy guy who’s on a roll, those are the kind of guys who change big series and do special things.’’

The Giants locked up Bumgarner long term in April 2012 on a $35.56 million, six-year contract through 2017. It could keep him in orange and black even longer, given the $12 million options for the 2018 and 2019 seasons. That almost seems like a bargain given Bumgarner’s performance and star power.

Bumgarner was MVP of the World Series and NL Championship Series, going 4-1 during the postseason following an 18-10 regular season.

From his four-hit, 10-strikeout gem that got things started in an 8-0 wild-card win at Pittsburgh all the way through his brilliant relief outing in Game 7 of the World Series, Bumgarner dazzled like never before.

“He pitched a different game than we had seen from him earlier in the season,’’ Pirates Manager Clint Hurdle recalled recently. “We had watched video and saw how much sharper he had gotten as the season played out. In the wild-card game he had command of all his pitches and lived on the edges the entire outing. He also used his fastball up in the zone with deadly accuracy.’’

Despite the heavy workload, Bumgarner will be eager for spring training come February.

“Everything feels great and we’re looking to just keep a normal offseason and a normal routine,’’ Bumgarner said.

It will hardly be normal given the attention and hype he is sure to generate after a spectacular 2014.