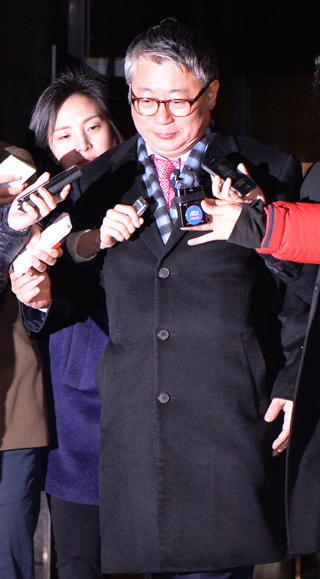 A local court Wednesday dismissed the prosecution’s request for an arrest warrant for Cho Eung-cheon, the former presidential secretary for civil service discipline who allegedly leaked documents regarding back-room maneuvers at the presidential office.

The Seoul Central District Court said it is “difficult to acknowledge the necessity to arrest him for investigations” into the Blue House influence scandal.

Prosecutors assert that Cho passed on confidential presidential documents related to Chung Yoon-hui, a former aide to President Park Geun-hye during her days as a lawmaker, to her younger brother Park Ji-man, who’s also the chairman of EG Group, an electronic materials producer. That report, which alleged that Chung was still exerting his influence with the president’s close aides, was leaked to the press.

Cho was grilled by prosecutors for 17 hours last week as to whether he passed the Blue House documents to Park and why. After questioning that day, he told reporters, “I’m not saying that the content [of the report] is 60 percent fact, but there is a 60 percent chance that it is true.”

Cho, who faces charges of violating the Presidential Records Management Act, reportedly denied the allegations on Tuesday during the review session over his arrest warrant, telling the court that what he gave Park “weren’t Blue House documents, but around six notes,” according to a prosecutor who asked for anonymity.

The notes, Cho continued, were a “warning to Park and his spouse against people who were approaching them with foul intentions” as part of his duty to “manage presidential relatives.”

The prosecutor did not mention who the “people” Cho were referring to, but added the prosecution has “seized physical evidence and testimonies” on his allegations.

The Seoul Central District Prosecutors’ Office said it will indict Cho without physical detention and announce the results of its investigations into the scandal Monday.

A local daily on Nov. 28 leaked what it called an internal Blue House report, saying that the president’s top aide from more than a decade ago, Chung Yoon-hoi, meddled in state affairs with 10 presidential aides at the Blue House.

President Park had earlier dismissed the documents, calling it “jjirasi,” a Japanese word that refers to unverified gossip circulating among stock traders and the media.

Park Gwan-cheon, a senior police officer who admitted to drafting the report while he was seconded to the Office of the Presidential Secretary for Civil Service Discipline, was arrested last month. The officer testified he was ordered by Cho, his superior, to write the report.