In address, president positive about the year ahead

In address, president positive about the year ahead 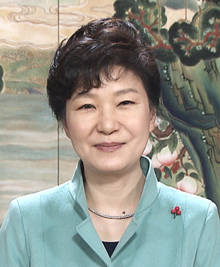 President Park Geun-hye vowed in her New Year’s address to lay the groundwork for reunification by persuading North Korea to come out of isolation based on a policy of trust.

“With strong national security as the backbone, I will pursue an end to 70 years of division and conflict,” the president said in her speech, which was posted on Youtube and her Facebook page on Wednesday, hinting at what could be a softer North Korea policy this year aimed at engagement.

The Park government expressed its hope for better ties with Pyongyang on Monday when it offered to hold ministerial talks with North Korea to discuss issues of mutual concern without conditions. The North has yet to respond to the proposal for talks.

Her remarks on inter-Korean relations come as her administration enters its third year in 2015, a year considered crucial for the government to seek reform-minded policies and a breakthrough in Seoul-Pyongyang relations. This year is the only one free from a major scheduled election, giving the Park government more room to pursue its policy objectives.

Park noted that 2015 holds special meaning, in that it marks both the 70th anniversary of Korea’s liberation from Japanese colonial rule as well as its national division.

“Looking back on the past 70 years, we have achieved the Miracle on the Han River and democracy with an unwavering resolution and unity among the people,” the president said, noting that Koreans have a responsibility to the next generation to pass on a country of which they can be proud.

To do so, Park stressed the importance of reviving the country’s stagnant economy and pledged that she will work to open an era in which $40,000 is the annual average income level.

She also pledged to continue her efforts to rid the country of the social ills exposed following the Sewol ferry disaster.