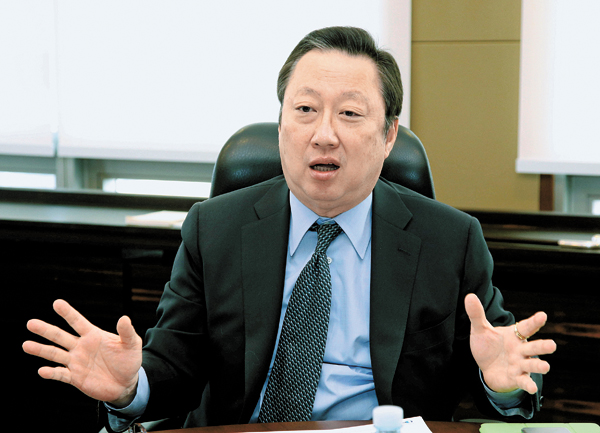 Park Yong-maan, chairman of the Korea Chamber of Commerce and Industry, speaks during his New Year’s meeting with the press on Thursday at the KCCI building in Seoul. Provided by the KCCI

Korea must make bold deregulations in order to bring about a shift among local businesses that could improve the sluggish economy, said Park Yong-maan, chairman of the Korea Chamber of Commerce and Industry (KCCI).

Park, who is also the CEO of Doosan Group, said the nation has only been taking small steps by just dealing with easy deregulations that he called “low-hanging fruit.” In order to bring about major change, the government should make it easier for people to establish businesses and ease requirements to help small businesses grow, he said.

“In order for deregulatory changes to benefit more people, political parties should cooperate [to create legislation],” Park said. “[Related stakeholders] need to see it from a broad point of view, and big decisions should be made that will deliver changes to the overall structure of the state.”

Park, who many call “Mr. Twitter” because he often communicates with the public and Doosan employees via social media, held a New Year’s press conference on Thursday at the KCCI headquarters in central Seoul to talk about his hopes for Korean businesses in 2015.

Q. How would you evaluate the government’s deregulatory initiatives and its pace in 2014?

A. The Korean government has the willingness to overhaul regulations, and the initiative has actually brought about changes in 2014.

The direct beneficiaries of the changes have given positive feedback, but indirect beneficiaries say the substantial impact of the deregulations has been small. In order for deregulatory changes to benefit a larger pool of people, the political communities should cooperate [on legislation]. [Related stakeholders] need to see it from a broad point of view, and big decisions that will deliver changes to the overall structure of the state should be made. In the process, the government should lower businesses’ [financial] barriers and lift prerequisites [that prevent small businesses from growing].

Anti-chaebol sentiment has risen after the Korean Air heiress nut rage incident. Are there any solutions to overcoming this challenge?

I think the nut rage incident has come from growing pains, which are the result of Korea’s excessively compressed economic growth during the past half-century.

However, the public shouldn’t prevent chaebol heirs from owning the stocks they inherited in a capitalist nation like Korea.

To develop the incident into a turning point for Korean business circles, Korea should foster more successful small businesses and let them succeed. At the end of the day, those independently owned businesses should make up at least half of the nation’s top 20 conglomerates in sales.

Amid the sluggish economy, some are saying that imprisoned businessmen should be released on parole or pardoned. What is your take on this issue?

I am normally very careful about making comments while judicial procedures [regarding the nation’s top businessmen] are still in progress.

But honestly, I hope [the public] gives a second thought to SK Group Chairman Chey Tae-won, because he has been dealing with his punishment. Punishing someone means not just making the person reflect on himself but also to give him a chance to find a new way to improve. Cutting-edge industries [that SK specializes in] change rapidly, so major business decisions have to be done by the group’s de facto owner.

I’m not saying that Chey has to be pardoned just because the economy is forecast to stay sluggish this year. I hope that people look at these circumstances from different perspectives.

There is a lot of debate these days around reforming the local labor market. What do you think of implementing the peak wage system while improving conditions for contract workers?

The economy will be revived after its arms and legs are freed. As we business lobby groups argue, the Korean labor market should allow more flexibility in hiring conditions for regular workers.

Then, companies will be able to hire more contract workers and provide them with better benefits. When wage goes hand in hand with seniority, Korean industries may face troubles with competitiveness. Wages should be proportionate to actual performance.