Cotillard stands out in ‘Two Days, One Night’

Cotillard stands out in ‘Two Days, One Night’ 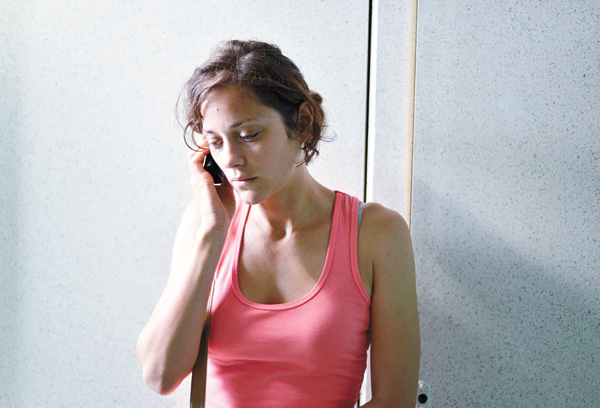 This photo released by Sundance Selects shows Marion Cotillard as Sandra in a scene from the film “Two Days, One Night,” written and directed by Belgian filmmakers Jean-Pierre and Luc Dardenne. [AP/NEWSIS]

“Put yourself in my place.’’ It’s a line heard a number of times in “Two Days, One Night,’’ the exquisitely simple and moving new film from Belgium’s Dardenne brothers.

It’s central to the story, but doesn’t the line also encapsulate what cinema is supposed to accomplish, essentially? Forcing us to put ourselves in the place of those onscreen and to wonder, often with discomfort: What would I do?

Not all filmmakers pull it off, but it’s something the Dardennes, Jean-Pierre and Luc, are remarkably good at - making us understand just what we share with their characters, working-class people in industrial Belgian cities who are decidedly neither heroes nor villains, just ordinary folk trying to get by.

And their effort is even more remarkable here, because the writer-directors are working for the first time with a bona fide, glamorous movie star: Marion Cotillard. The fact that it works so well is a tribute both to Cotillard’s committed, selfless work and to the Dardennes’ unerringly authentic instincts.

Cotillard plays Sandra, a mother of two young children who works at a solar panel factory. It’s significant that we never see Sandra actually doing her work. It doesn’t matter. Over the course of the film we’ll learn just how important that work is - not simply to her economic survival, but to her very identity and sense of place in the world.

The action unfolds at a deliberate pace. Only gradually do we realize Sandra has been on medical leave for depression. As the film begins, we know only that she’s been hit with a severe blow: The boss has determined that 16 workers can perform the job of 17, with a little overtime. Her fellow workers have been given a choice - a 1,000 euro bonus ($1,200), or - return. They’ve voted for the money.

But Sandra wins a second chance: A new ballot, on Monday morning. All she has to do is convince a majority of the 16 to give up their bonus. She has, as the title says, two days and one night.

With the help of a concerned and supportive husband (Fabrizio Rongione), Sandra heads out to knock on doors. Each of these encounters is painful. Sandra is a mass of jangled nerves, prone to popping Xanax to get through the day, or escaping to bed in the afternoon. She hardly feels capable of arguing for her economic survival.

The finale is redemptive, yes, but not in the way you expect. Not surprisingly, it’s the most un-Hollywood of endings.