Latest movies are labors of love for directors

Latest movies are labors of love for directors 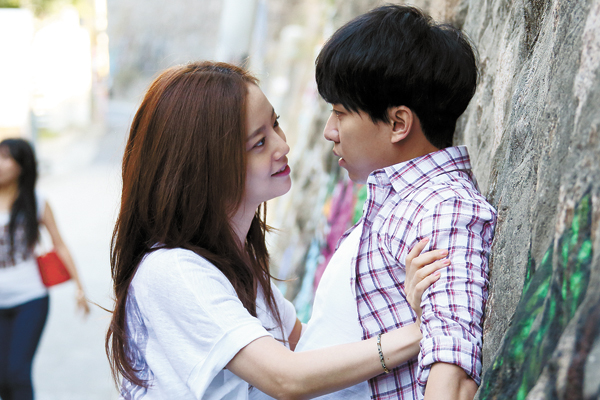 Actors Moon Chae-won, left, and Lee Seung-gi feature in the upcoming movie “Today’s Love” as longtime friends on the verge of becoming lovers. Provided by the distributors

Accordingly, the stakes are set high for 2015, with many ambitious films from home and abroad waiting to hit theaters.

Park Hae-jin, left, and Lee Young-a tell the heartbreaking story of a couple who must face up to the fact that one of them has only days to live. Provided by the distributors

Calling into question the ongoing trend of underestimating the sincerity of relationships between men and women, director Park Jin-pyo said that he made “Today’s Love” in the hopes that it will “encourage young people to think more deeply about the romantic relationship.”

Director Park’s filmography includes “You Are My Sunshine” (2005) and “Closer to Heaven” (2009), both of which were tearjerkers with terminally ill patients as their protagonists.

This time, Park avoided the sad and heavy ambience of his previous works and lightened the mood with expletives, parties and alcohol.

But his genuine attitude towards love remains unchanged.

The film features Lee Seung-gi and Moon Chae-won, two of the hottest up-and-coming actors in Korea, as Jun-soo and Hyun-woo, who have been friends for 18 years.

Jun-soo is a sensitive elementary school teacher. He is certain that he has a strong affection toward Hyun-woo and has confessed his feelings many times, but things didn’t exactly turn out the way he expected. On the other hand, Hyun-woo, the popular weather reporter in town, runs to Jun-soo only when she feels vulnerable and in need.

“Holding hands is the physical affection I allow while in that [early relationship] phase,” the director said during a press conference on Dec. 16.

“I am a little stingy about the physical contact.”

Lee and Moon said they permit hugs and kisses, respectively, but nothing more at the start of a relationship.

“The movie reflects my intention of encouraging deeper romantic relationships in 2015 instead of being troubled about going through the phase before that,” said the director.

“The way people love these days is as light as a cotton candy,” director Kim Jung-kwon said in a press release for his upcoming movie “Snow in Sea Breeze.” “Because I’m feeling bitter about this, I hope the movie will make people think about care and sacrifice once again.”

Not veering too far away from his old style, “Snow In Sea Breeze” has Park Hae-jin and Lee Young-a playing Sang-woo and Sun-mi, who fall in love and mend each other’s wounds along the way.

The couple’s relationship is smooth sailing until Sun-mi is diagnosed with myelodysplastic syndrome, a blood disorder that leaves her with only a few days to live.

“This is my return after a five-year hiatus,” said Kim at a press screening held on Dec. 19.

“I have made romance movies five times and I wanted to approach this with more sincerity. Like a film that makes people think and question themselves instead of just forgetting it once they’ve watched it.”

The movie, which was promoted at the 19th Busan International Film Festival, was sold in advance to four other Asian countries - Taiwan, Hong Kong, Philippine and Indonesia.

When Park was asked if he could wholly devote himself to love just like the character he plays, he said that every man would act the same if they loved someone.

“I don’t know if I could make a sacrifice as big as the one shown in the movie, but I don’t look the other way when I am with someone,” he said.