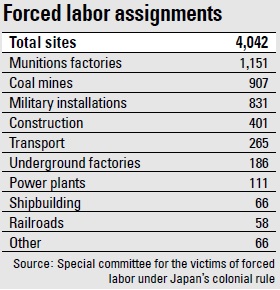 A government body investigating Japan’s conscription of thousands of Koreans into labor has identified 291 Japanese firms that exploited Korea’s workforce during Japan’s colonial rule that are still in operation.

The finding, detailed in a report by a special committee for the victims under the Prime Minister’s Office, sheds light on the widespread exploitation of Korean men and women between 1931 and 1945 by nearly 300 Japanese companies.

Of those companies, 66 were new additions to the list and included big industry players such as Toyota Motors, Nikon Corporation and Toshiba Corporation. Mitsubishi Heavy Industries and Nissan are among the groups that were already found to have forced Koreans into labor during World War II prior to the latest report.

The details come after a four-year effort by the committee to unearth the injustices carried out by Japanese companies.

According to the paper, an estimated 7.82 million Koreans were subjected to forced labor, with about 1 million drafted to Japan each year during World War II. The committee’s conclusion is based on a study of 27,841 reported forced mobilization cases and relevant records that attest to Japan’s abuses.

It also discovered that 1,329 Japanese companies at the time ran 4,042 sites at which Koreans were assigned to work.

“The latest study into forced labor bore significant meaning in that it was the result of the first government-led investigation to make public the names of companies that exploited Koreans,” said Jung Hye-kyung, who participated in the project, noting that the previous study into conscripted labor was largely carried out by Japanese civic groups, which also disclosed a list of Japanese companies that took advantage of the Korean work force.

“The study also bears special meaning [for the families of victims] as it could be used to demand compensation through legal action,” she said.

Jung added that the panel checked facts by delving into old documents that had been kept hidden in Japan.

In particular, the report sheds light on specific labor exploitation cases, one that involves a man surnamed Kim who was sent to Japan from his hometown in North Jeolla in 1943, when he was just 20 years old, to work at an auto-parts assembly factory in Aichi Prefecture.

The factory was owned by the car maker, which has since become Toyota Motors. Kim is known to have worked there for two years, and paid with cigarettes. After Korea was liberated following Japan’s defeat in World War II, he managed to make it back to Korea, buying a ferry ticket by selling the cigarette packs he had saved.

According to the report, the 4,042 sites where Koreans were forced to work were scattered around Japan’s coastal areas. Munitions factories accounted for the most with 1,151 sites, followed by coal mines with 907, and 831 military installations.

It adds that Imperial Japan forfeited salaries for conscripted Koreans in the name of supporting the war effort.

“A very tiny fraction of Japanese companies reported to authorities the wages they confiscated from their Korean workers. These records now serve as a crucial evidence for compensation suits,” Jung said.

The report comes on the heels of a series of court rulings that sided with the victims and ordered the companies to pay the wages owed.

In July 2013, Seoul and Busan’s high courts ordered Nippon Steel Corporation to pay the compensations demanded by its victims. The Japanese steelmaker went on to appeal the ruling and the case is now pending at the Supreme Court.

Likewise, in November 2013, the Gwangju District Court ruled that Mitsubishi Heavy Industries should compensate four of its Korean laborers.

It also appealed the ruling and took the case to a higher court, claiming that financial payments had already been settled in 1965, when Japan paid Korea $300 million in aid and Seoul and Tokyo normalized diplomatic relations.

That claim, however, has long been rebuked by experts, including Lee Jang-hie, a professor who teaches international law at Hankuk University of Foreign Studies. “The 1965 reparation agreement between Seoul and Tokyo does not stipulate that Japan be held accountable for its legal responsibility concerning colonial rule, nor its responsibility for compensating the Korean people for the damage it inflicted during colonization,” he said.