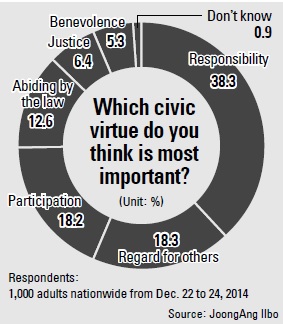 More than 300 people died last year in the April 16 Sewol ferry disaster, most of them Danwon High School juniors elated about their class trip to the resort island of Jeju.

The tragedy, the worst maritime disaster in Korean history, was an event no one saw coming.

But despite the negligence of the ship’s captain and crew, who abandoned the boat to save their own lives, or the fact that the ferry was heavily overloaded with cargo or even how poorly the Coast Guard handled the rescue operations, a silver lining could still be found - among the Korean citizenry.

More than 50,000 people from nearly 7,000 organizations volunteered to help in the aftermath, and approximately 720,000 relief goods were delivered to the families whose loved ones were on the ferry that fateful day. In fact, donations to the victims’ families surpassed 128.4 billion won ($118 million).

“It’s difficult to resolve social issues solely through the government or the market because contemporary crises are complex,” said Kang Won-taek, a politics and diplomacy professor at Seoul National University, further underscoring the need for participation from the public sector.

In a phone survey conducted from Dec. 22 to 24 by the JoongAng Ilbo, 82.5 percent of the 1,000 adults polled said social issues grab their attention every day for at least 10 minutes.

Similarly, 79.3 percent replied that the public’s role in society will likely grow in the future, downsizing influences by the government or the market. And 81.8 percent said they think civic roles are the foundation of democracy.

Yet, only a quarter said they’re affiliated with a civic organization or the residents’ committee in their neighborhood, and more than half said they participate in activities serving public interests less than six times a year.

The civic participation rate stood in stark contrast to the high percentage (74.2) of people who said they believe the country is in crisis.

One man, surnamed Jeong, said he considers himself an extrovert. He is affiliated with an opera and golf club and participates in alumni meetings about 10 times annually.

On the other hand, the 40-year-old office worker who resides in Gimpo, Gyeonggi, said he has never been a member of a public organization or sponsored one.

Debating current affairs with his coworkers, he added, is as far as he goes in pondering the world in which he lives.

“I do believe in the vitality of citizenship, and how it’s the cornerstone for social development,” said Jeong. “But my office hours are irregular and I’m not informed about civic organizations, which is why I haven’t really thought about joining one.”

Kim Moon-soo, a Saenuri Party lawmaker on the Seoul Metropolitan Council, blamed the public’s self-centeredness to some degree.

“When it comes to issues that directly affect [their lives], like urban redevelopment projects or [free] school meals, people take to the streets and rally,” Kim said. “But when a critical topic is up for a debate at a public hearing, no one really shows up.”