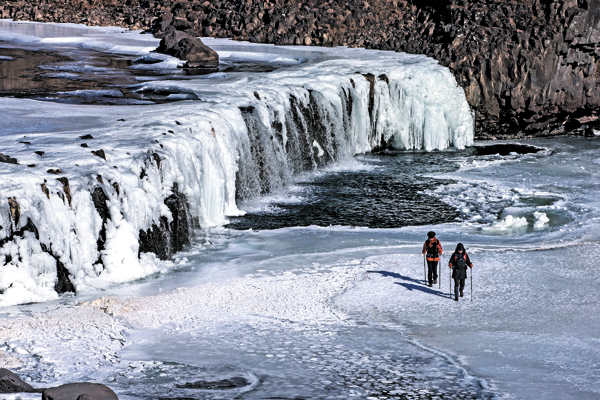 When the mercury dips below minus 20 degrees Celsius (minus 4 degrees Fahrenheit), Hantan River in Cheorwon, Gangwon, freezes over and people can walk on the ice. [JoongAng Ilbo]


Love it or hate it, winter is here to stay for a while. 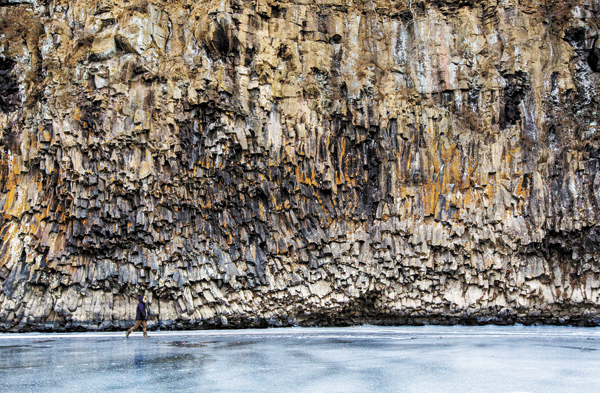 Another highlight of ice trekking at Hantan River is the pillar-shaped cliffs.

So if you don’t want to spend the whole season curled up with a book indoors, you should get outside and enjoy it. 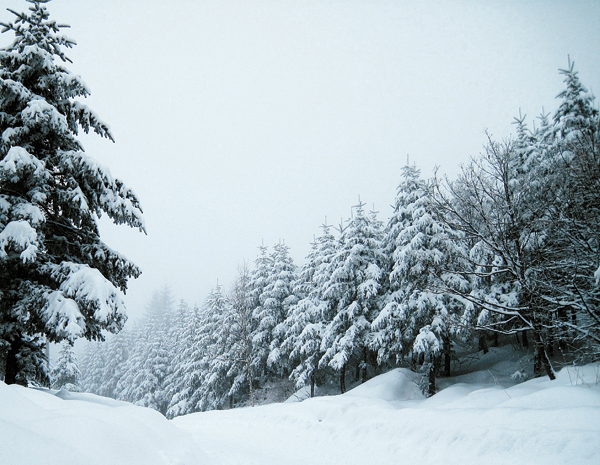 Sunjaryeong in Gangwon is often considered Korea’s answer to the Alps.

You could choose to go skiing or beat the winter chill by flying to a warmer country for a vacation. Or you could go to the extremes and dive into Mother Nature by seeking out some of the snowiest destinations across the country.

Trekking along icy trails around this time of year is a daunting task. You need more energy and more equipment to protect yourself from possible harm.

Nari Basin, located at the top of Seonginbong Peak on Ulleung Island, gets up to two meters (6.6 feet) of snow in the winter.

But taking the risk will bring you to the most rewarding romantic scenery.

The JoongAng Ilbo, an affiliate of the Korea JoongAng Daily, has selected four destinations that are perfect for a wintrywalk: Mount Halla on Jeju Island, Hantan River and Sunjaryeong in Gangwon, and Ulleung Island.

Right now is the perfect time to explore Mount Halla, the tallest mountain in the nation. In wintertime the lines of the mountain terrain and oreum, or tiny volcanic zones, become much clearer and more visible when they are covered in snow.

The mountain is the tallest in the country at 1,950 meters (6,397 feet) above sea level, meaning that it has several paths to the top.

Of the five available trekking courses, the easiest is Yeongsil Trail, which is 3.7 kilometers long.

Yeongsil means “a place where the gods reside.”

The walking trail is often frequented by hikers with children.

It is an easy course, but that does not mean it has nothing to offer.

Yeongsil is considered one of the most beautiful treks, as its huge rocks remind people of those found in the Himalayas.

The most popular course at Mount Halla is Seongpanak Trail, which stretches for 9.6 kilometers.

The trail is always crowded with hikers, but it is popular because you can use it to reach Baekrokdam, the huge sacred crater on top of the mountain.

The most formidable course is Gwaneumsa Trail. This is only for skillful hikers.

And if you feel like being experimental, try out Donnaeko Trail.

It was shut down for 15 years but reopened in 2009. Because it was off-limits to the public for such a long period of time, the trees and nature surrounding the trail have remained almost intact.

The weather is fickle at Mount Halla, so hikers need to be fully prepared with waterproof clothing and professional equipment such as sticks, spats and crampons.

All the courses are quite long, and as the mountain is covered with snow throughout the winter, enough bottled water and sunglasses are a must.

Korea’s answer to the Alps

Sunjaryeong is nestled between Gangneung and Pyeongchang in Gangwon.

As the trail is located on the ridges of the Baekdudaegan mountain range, hikers are able to see as far as the East Sea on a fine day.

The trail is also quite flat, so anyone can walk on it with ease.

Among the many wintrydestinations, Sunjaryeong is famous for its thick fir trees covered in snow. The sight of the trees caked in snow remind people of the Alps.

A round trip takes between three to four hours starting from the Daegwallyeong rest area and ending at the peak.

Picturesque scenery unfolds on the way up to the peak, but the highlight comes when you reach the very tip of the mountain.

About 50 wind generators that look like pinwheels and rise 80 meters into the sky move slowly at the top of the trail, creating a very quaint atmosphere.

Some of the farms located near Sunjaryeong are worth checking out, too.

Sky Ranch, which reopened last year for the first time in 40 years, and Daegwallyeong Sheep Farm are located within close proximity of Sunjaryeong.

Sky Ranch and Daegwallyeong Sheep Farm are both home to dairy cows and sheep.

Diverse hands-on activities are on offer for families who visit the farms, such as feeding the animals and horseback riding.

The country’s most remote spot

Ulleung Island, which is about 120 kilometers east of the Korean Peninsula, is usually considered the snowiest part of Korea.

In big cities like Seoul it only takes three centimeters of snow to slow everything down - from people to traffic - but snowfall can reach up to one meter per day in January on the volcanic island.

Nari Basin, which is on top of the island’s Seonginbong Peak, can get up to two meters of snow alone.

The remote island promises hikers the best winter scenery, but it is not easy to get to.

Ferries that take passengers from Pohang, North Gyeongsang, to Ulleung Island often don’t operate for several days because of the capricious weather.

As a result, traveling to the island depends on your luck.

Even if you manage to take a ferry, it takes more than 10 hours to make the one-way trip from central Seoul, which is equivalent to the time it takes to fly from Seoul to Brazil.

Despite all odds, extreme hikers head to Ulleung because they can spend as much time in the snow as they want once they get there.

A sure-fire way to enjoy the island is to hike to Seonginbong Peak, which is 986 meters above sea level.

Although it is not a very high peak, even experienced hikers have trouble reaching it when it is covered in waist-high snow.

For this reason, veteran hikers often ask for help from locals who are well aware of Ulleung Island’s terrain.

Descending is more energy consuming than ascending for most hikers, but this is the opposite on the island because hikers are able to ski or slide down instead of walking.

If you want help from local hikers, head to Ulleung Mountaineering Club’s website at cafe.daum.net/ulac.

Ferries depart every morning between 9 a.m. and 10 a.m. in Pohang, but the departure schedule is updated at around 7 a.m. each day because of the changing sea conditions.

Trekking on ice at Hantan River

Walking on water is possible at Hantan River in Cheorwon, Gangwon, but only this month.

Cheorwon is one of the coldest parts of Korea, and Hantan River becomes frozen solid when the temperature dips below minus 20 degree Celsius (minus 4 degrees Fahrenheit).

The best time to explore the frozen river is for a few days from the middle to the end of this month.

Since the depth of the ice is between 15 and 25 centimeters (six to nine inches), people are able to safely run - and even stomp - on the ice.

An ice trekking festival is also held every year at Hantan River. This year’s festival will be organized on Jan. 17 and 18.

Any imaginable winter activity you can do on frozen ice, from curling to sledding, is available during the two-day event.

The ice trekking course at Hantan River starts from Jiktang Falls and stretches about 6.5 kilometers, ending at Goseokjeong, or Goseok Rock.

Of the many highlights of the icy course, the first is Jiktang Falls, where the trekking begins.

The huge waterfall is 40 meters in height and three meters in width, and appears to be frozen.

But do not go under the falls to touch the ice because parts of it are still running.

The second highlight is the pillar-shaped adjoining cliffs near Songdaeso.

You can walk the trail by touching the rugged, basalt cliffs.

Trekking shoes and hiking sticks are necessary for those who want to head to Hantan River.

The use of a hiking stick is very important for safety reasons because hikers are able to check the solidness of the ice before changing their direction.