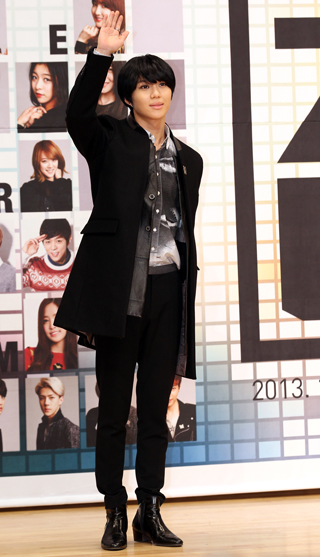 Taemin, a member of K-pop boy group Shinee, has earned the most votes from K-pop music fans at the 2015 Golden Disc Awards in the category for the most popular artist who released an album last year.
Prior to the annual awards that will be held in Beijing, China, later this month, the festival organizer is allowing fans to vote for the winners of three different categories.
The other two sections are for artists who released digital singles last year and singers who debuted last year.
Fans are able to cast their votes for musicians who they think excelled the most in 2014 before the award ceremony begins.
The voting opened on Dec. 10. Taemin had earned about 250,000 votes, or 17.4 percent, as of Thursday. He is slightly ahead of boy group Exo, who earned about 210,000 votes.
Taemin released his first solo album “Ace” in August.
After Taemin and Exo, Toheart, Bangtan Boys and Super Junior are in line as the No. 1 and No. 2 K-pop singers.
The 2015 Golden Disc Awards will be held on Jan. 14 and 15 and will be broadcast live through China’s biggest video streaming website, Iqiyi.com.
In Korea, the awards show will air on JTBC. K-pop stars and indie musicians will also perform at the awards in addition to the ceremonies.