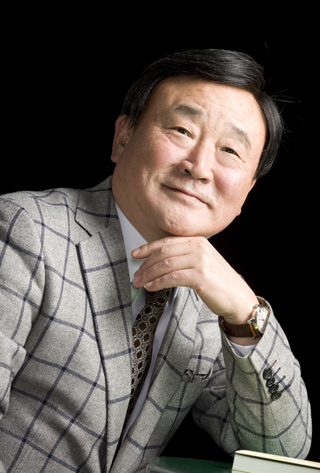 Nobody wants to be seen as stupid in a cunning world.

But Kang Min-soo proudly preaches his “stupid philosophy,” arguing that society will change for the better when people begin to free their minds.

The 64-year-old is the chairman of Babo Club, which translates to “stupid” in Korean, a community service organization established 10 years ago.

In an interview with the JoongAng Ilbo, Kang broached the subject of hiking to explain the ideology behind it.

“When you climb a mountain, it’s too painful when you start calculating how many meters you have to go to reach the peak,” Kang said. “But when you empty your mind and take one step after another, you will eventually reach the top.

“I refer to people who are naive and innocent as stupid. I believe they don’t get swept away by general trends. They just continue on their own journey,” he added.

Kang’s Babo Club was founded in 2004, the result of a small, private meeting in Busan. Those who read Kang’s book, “If I Become Stupid, I Get Friends,” written in 2001, established the group hoping to start something meaningful.

Currently, the total number of online members is nearly 7,000. Every week, about 200 visit nursing homes and facilities for the handicapped to volunteer.

He is also the owner of Samwon Ad, an advertisement company, which he established when he was in his late 20s after quitting his government job to work toward eliminating illegal posters that blemished the city skyline. He set up bulletin boards for Busan citizens in different areas around the city, which served as a way for residents and tourists to access information while keeping the city tidy.

“On one hand, I wanted to make money, but more than that, I thought it was my vocation,” he said. “I kept the business, running the board for 34 years without expanding it. I currently operate about 1,000 bulletin boards in Busan.”

Kang started college in his late 30s. After studying business management at Korea National Open University, he completed his master’s degree in journalism at Dong-A University.

His experiences, he said, have helped him formulate a message to young people who have had to endure childhood hardships.

His most recent publication “Babo Textbook” is a compilation of letters he wrote to members of the Babo Club - who are mostly in their 20s and 30s - at 4:30 a.m. every morning.

“It is difficult to convince struggling young people to accept adults’ advice that they should try to find satisfaction with their current situation,” he said. “But when you keep at it, and serve the people who need your help the most, you will eventually feel that you are a person who should exist for someone else. It’s something that you should learn from physical experience, through your body.”