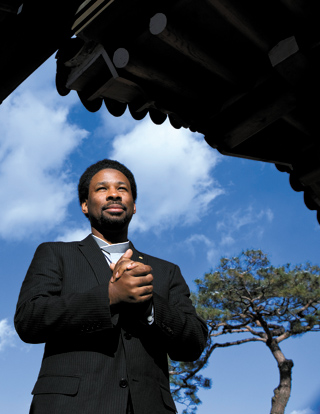 Dathane Turner, the first American believer in Won Buddhism’s 100-year history, says his mother, a Christian, initially didn’t welcome her son’s decision to ascribe to the religion but accepted it later. By Kwon Hyuk-jae

There, Dathane Turner, the first American believer in Won Buddhism’s 100-year history, sat quietly at a coffee table. He visited Korea to conduct a spiritual ceremony and was scheduled to fly back to the United States shortly after.

There was sadness in his family affairs.

The question “Why is my life is so arduous?” has lingered in his mind since he was a young boy, Turner said.

To find the answer, he tried to study positive psychology at graduate school and looked around asceticism centers.

But all those attempts turned out to be in vain.

One day when he searched for “meditation” on the Internet, he was randomly taken to a webpage that introduced him to Won Buddhism.

So Turner immediately drove to the Won Buddhism chapel in Philadelphia, 30 minutes from his home.

When he opened the door, there were less than 20 Americans of different ages, he recalled.

A Buddhist service was conducted in English, and after participating he made up his mind to move closer to the sanctuary.

Turner recalled the spark that enlightened his mind back then: The hospitable atmosphere among those who had welcomed him.

“That atmosphere filled something absent inside of me,” he said.

Four days later, he read the Won Buddhism scriptures in English, which broke down the wall that had held him back in his early days. Turner finally secured a “state of peace,” giving his mind room to rid himself of his worries and insecurities.

“Courage,” Turner says, is what people need. His courage, in particular, was inspired by Yoo Gwan-sun, the patriotic martyr who fought against Japanese colonial rule in Korea in 1919, whom he read about when studying the Korean language.

Upon his arrival here, Turner visited the Seodaemun Prison History Hall and the birthplace of Yoo Gwan-sun in Cheonan, South Chungcheong, when he finally realized that religion was crucial both in changing one’s external paradigm as well as one’s internal paradigm.

At that, he referenced the Buddhist scripture. “I like the description ‘Everything is the creation of the mind,’” he said.