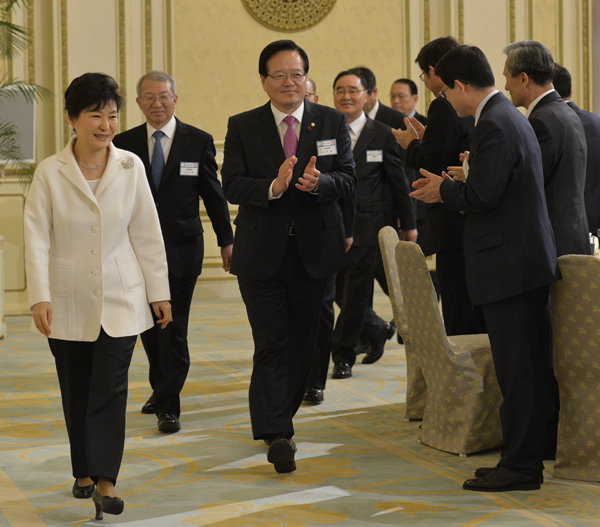 President Park Geun-hye heads into a New Year’s meeting at the Blue House on Friday with 200 top government officials, including leaders of both the ruling and opposition parties, the prime minister, the National Assembly speaker, presidential secretaries, ministers and judicial leaders. [NEWSIS]

President Park Geun-hye emphasized in a New Year’s meeting with her top government officials on Friday that “unification is not an idealism or a dream,” a day after North Korea leader Kim Jong-un proposed a high-level summit with Park in his New Year’s address.

President Park convened a New Year’s meeting with nearly 200 top government officials on Friday afternoon at the Blue House, where she said that her administration “will try its utmost on practical preparations needed for tangible and real [unification] to be realized.”

The meeting included leaders of both the ruling and opposition parties, the prime minister, the National Assembly speaker, presidential secretaries, ministers and vice ministers, and judicial and economic leaders.

On Thursday, Kim Jong-un said in his New Year’s address that there was “no reason not to hold a summit meeting depending on the mood and environment” with President Park, especially since this year marks the 70th anniversary of Korea’s liberation from Japanese colonial rule.

Because the Blue House has indicated its intentions to improve North-South relations, questions arose a day after Kim’s proposal over how Park would respond.

On Monday, the South’s Presidential Committee for Unification Preparation initially proposed to Pyongyang a minister-level meeting this month to discuss a range of issues, including reunions for aged families separated by the 1950-53 Korean War.

President Park said in her New Year’s address to the nation on Wednesday that the government “will work to put an end to the 70-year division that has caused severance and conflict, and would encourage North Korea toward a path of trust and change.”

She added that her administration plans to “lay a substantive, concrete foundation on which to achieve unification.”

“We are not concerned about the format,” said a high-level government official. “Rather, the act of holding talks is what’s important,” whether that be high-level talks or the minister-level talks as proposed by Seoul. He indicated that a leaders’ summit could be discussed in such platforms.

If government talks with the North manifest, family reunions would be the top priority, he added.

“If we do not resolve the issue, our people will have to hold this history in shame,” the government official said. “If things go well, confirming their identities and if they are alive will takes less than three years. ... If this follows through, it will considerably alleviate the grievances of these separated families.”

“In the New Year, the North-South relations have to be eased. The Unification Ministry’s task is to improve North-South relations, and to move toward a path of unification,” he added. “The 70th anniversary of liberation and separation is not just a number but is important in many other aspects. Depending on how we proceed, the next five, 10, 30 years are decided.”

However, the two sides still have a number of long-standing issues between them. The denuclearization of Pyongyang, creating conditions necessary for the resumption of six-party talks and holding additional family reunions are among the primary concerns.

North Korea also holds a lot of anger over the annual joint military drills between the United States and South Korea and has requested that Seoul lift the May 24 sanctions and resume the tourism program on Mount Kumgang.

Former Presidents Kim Dae-jun and Roh Moo-hyun each met with late North Korean leader Kim Jong-il in 2000 and 2007, respectively. By contrast, the leaders’ summits during the Kim Young-sam and Lee Myung-bak administrations fell through in the negotiating process.

Many hurdles remain, however, in order for the successful fruition of a third inter-Korean leaders’ summit.

The United States is one of the biggest factors. And while Washington in principle has supported an improvement in North-South relations, it has held a hard-line stance on refraining from dialogue in the absence of a sincere move toward denuclearization.

“The government position is that North Korea’s New Year address proposing talks, cooperation and contact shows a sincere posture toward dialogue and cooperation,” Ministry of Unification spokesman Lim Byeong-cheol said in a briefing on Friday.

He added that the government “adheres to the stance that we need to resolve issues with the North through dialogue, and North Korea’s New Year address once more provided an opportunity to reconfirm this. So if North Korea sincerely intends to improve inter-Korean relations, it will need to come to the talks without any preconditions.”

President Park earlier in the day also held a phone conversation with UN Secretary General Ban Ki-moon to “discuss cooperation with Korea and the United Nations and mutual concerns,” according to Blue House spokesman Min Kyung-wook.

They were said to have discussed the situation on the Korean Peninsula as well as Kim’s proposal for a leaders’ summit.