The sister of Kim Jong-un reported to have wed

The sister of Kim Jong-un reported to have wed 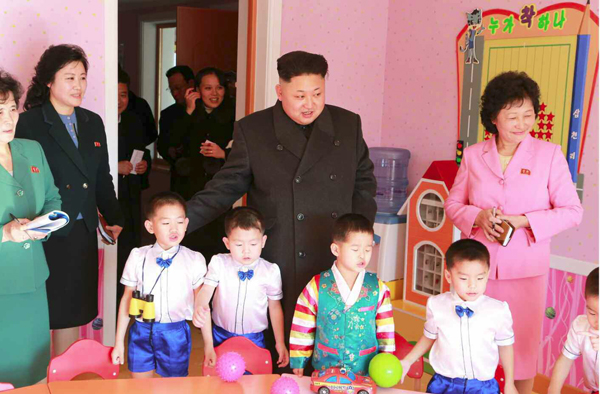 North Korean leader Kim Jong-un, accompanied by his younger sister, Kim Yo-jong, who is rumored to have married, visit Pyongyang Baby Home and Orphanage on Thursday, their first official outing of New Year’s Day. Kim’s sister is shown with a ring on her left hand. Provided by Rodong Sinmun

The North Korean leader’s younger sister, Kim Yo-jong, was spotted with a ring on her left wedding finger in a recent public outing with her brother, sparking speculation that she may have married.

North Korean leader Kim Jong-un visited an orphanage in Pyongyang on New Year’s Day, accompanied by his supposedly ascendant younger sister, according to the Rodong Sinmun, the mouthpiece of the ruling Workers’ Party. She was pictured with a ring on her wedding finger as she trailed just behind her brother.

The visit to Pyongyang Baby Home and Orphanage, Kim Jong-un’s first public activity of 2015, followed his national New Year’s address on Thursday, when he emphasized his dedication to public welfare amid controversy over the country’s dire human rights record, which has become a subject of UN concern.

There was also talk that she was already married.

Choe Ryong-hae is the son of Choe Hyon, a former defense minister and an anti-Japanese guerilla fighter who fought beside Kim Il Sung, and a lifelong loyalist to the nation’s founder.

He took on the role as the second most powerful man in the regime after Kim Jong-un’s uncle, Jang Song-thaek, was executed in December 2013.

However, South Korean government officials have yet to confirm Kim Yo-jong’s marriage status. According to Korean media reports, Choe has two sons and one daughter, and Kim is expected to have married Choe’s younger son, thought to be in his early 30s.