Minister under fire for remarks on Nuri project

Minister under fire for remarks on Nuri project 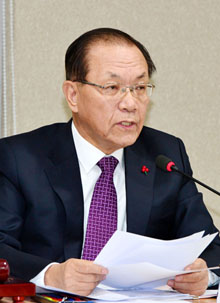 Education Minister Hwang Woo-yea is under fire for hinting in a New Year’s address this week that the central government will fully finance the controversial nationwide day care program - only for his ministry to publicly correct his comments later on in the same day.

Soon after local media reported Wednesday that Hwang said the government would “take responsibility” for the program - inferring that it would cover its expenses, according to the meaning of the phrase in Korean - the Ministry of Education sent out what it called an “explanation” of the minister’s statement.

“The government will take responsibility over drawing an equal starting line among young students through the Nuri program and school day care services in elementary schools,” Hwang said in his address.

The educational welfare project, known as the Nuri program, aims to improve the overall development of children ages 3 to 5.

Starting this year, the central government planned to withdraw its funding of the day care program, but regional governments threatened to discontinue it as a result, citing financial constraints.

Local education offices were responsible for 2.14 trillion won of the 3.93 trillion won that was needed last year to finance the national day care scheme.

Hwang’s comments about the program’s funding reignited the controversy over the issue.

Through a press release, the Education Ministry conceded that Hwang, who is also the deputy prime minister of social affairs, said that the government will take responsible for the day care project, but that this “doesn’t mean the Nuri program will be financed by state coffers.”

According to the ministry, Hwang meant that the central government will make sure the day care program goes ahead without a hitch, with funding from regional educational offices as stipulated by law.

“He was the deputy prime minister of social affairs making a New Year’s address about plans for steering the country’s affairs in 2015,” she said.

“Why on earth did he talk about obvious matters and held out on providing actual details?”