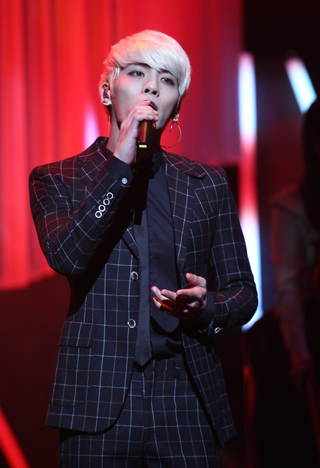 According to SM Entertainment, Jonghyun, a member of the boy group Shinee, will have his first official solo performance on Thursday entitled “Base of Jonghyun” at COEX Artium, located in Samseong-dong, southern Seoul.

“Base” is the title of Jonghyun’s first solo single album, which will be released on Jan. 12.

During the first concert on Thursday, the 25-year-old singer will sing and share some behind-the-scene anecdotes from the recording of his first solo album.

SM, which is home for musicians like Shinee and Girls’ Generation, also unveiled a list of musicians who feature on Jongyun’s solo album.

They are R&B singer Wheesung and female vocalist Younha.

Jonghyun debuted in the music industry as a member of Shinee in 2008, but this will be the first time he will perform without his bandmates.

He has been showing off his musical talents by composing several songs for other artists over the past few years.

He was reportedly writing and composing songs for his first solo album, too.

After the concert at Samseong-dong, Jonghyun is set to appear on KBS’s weekly music show “Music Bank” on Jan. 9.