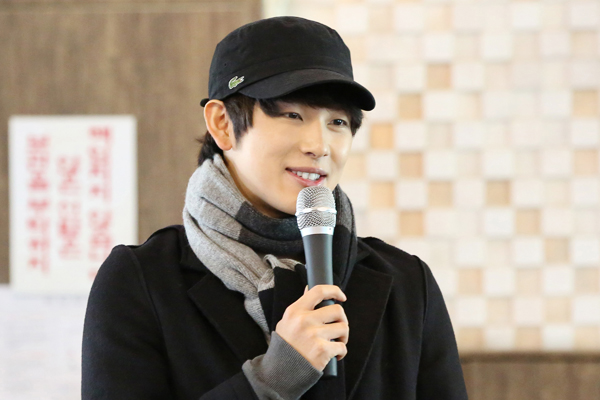 “Misaeng” is the most profitable low-budget office drama without a star cast in nearly 20 years of cable history.

It sold out its advertising spots every episode and is expected to earn 3 billion won ($2.8 million) from video-on-demand sales alone.

Almost all the actors and actresses in the drama, whether they played leading or supporting roles, received acclaim from viewers for their realistic portrayals of average Joes swayed by power struggles within a typical Korean company.

But the biggest beneficiary of the series is singer-actor Yim Si-wan, who made his debut in 2010 as a member of K-pop boy group ZE:A.

“I felt like I was an unnecessary stone in the game Go when I debuted as a member of ZE:A,” said Yim during a recent media event organized late last month at a restaurant located in Mapo District, central Seoul.

Jang spent his early years playing Go. He was once a promising elite player in the world of black-and-white stones, but he failed to sign with a professional team. Instead he found a temporary job working at a trading company.

In a sea of highly qualified employees who can speak up to four different languages, the clueless high school graduate is often underappreciated no matter how well he performs at work. And his future is always uncertain.

Critics say the drama’s success comes from the main character because viewers see themselves in him.

The title of the drama, which means “incomplete state,” also comes from the game Go. In the drama, it refers to ordinary people in a jungle-like workplace.

Because the press event was Yim’s first official appearance after the drama series, a throng of reporters flocked to the restaurant to hear what the actor had to say about his life-changing role.

Due to the immense popularity of “Misaeng,” Yim has signed contracts to endorse 10 different products - from clothing and finances to beverages and cars.

Despite rave reviews of the main character, the 27-year-old singer said he was not content with his acting in the drama series.

“I don’t think I’m accepted as an actor in this drama series,” said Yim.

“Rather, I felt I used up all the things I had inside as I was shooting ... In the latter half of the drama, I felt like I reached my limit with acting.”

Yim recalled the first time he received the screenplay for “Misaeng.”

“I thought to myself ‘I could have fun shooting this drama,’ but later realized this was not something I could approach easily. Eventually, I knew I was ‘misaeng’ in terms of acting.”

“In the beginning of the drama series, I thought I was the perfect fit for Jang Geu-rae, but I realized I was wrong as the drama went on,” he said.

“I later realized that viewers could relate to Jang not because of my acting but because they were already Jang in their real lives. I would say I’m about 80 percent similar to him.”

Apart from its down-to-earth portrayal of office politics, the drama series also struck a chord with viewers because of how quotable it is.

When asked to pick the most impressive line from Jang’s numerous quotes, Yim instead chose a line from supporting character Byun Seong-cheol: “I drink whenever I want, but you drink when others feel like drinking.”

The line is used when Oh Sang-sik, Jang’s boss in the trading company, entertains a client, Byun, by taking him to a room salon or a hostess bar.

“Those lines reminded me of my father, who was always drunk back when I was young. And it made my heart empty.

“I really hated the smell of alcohol on my father. The line made me think of him and I came to think ‘what happened to him?’ and ‘what made him drink alcohol?’”

Yim has not decided what his next project will be.

“I’ll just stay true to the things that fall into my lap. But I hope the new year will be the same as 2014. I know it won’t be easy, though.”