Purchasing with plastic to continue rise in new year

Purchasing with plastic to continue rise in new year 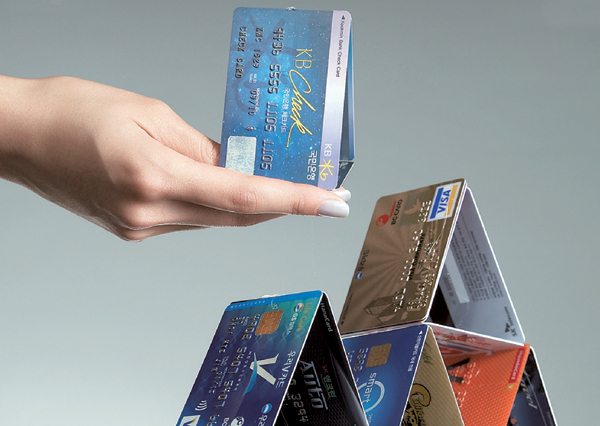 The total value of purchases made on cards is forecast to surpass 700 trillion won ($632 billion) this year for the first time, giving Korea the highest ratio of card use to gross domestic product in the world.

According to a report by KB Financial Group’s think tank on Sunday, the country’s total card use will reach 701 trillion won this year, accounting for 65.5 percent of nominal household consumption expenditures.

Despite the government’s expanded tax deduction for debit cards, use of the cards remains low across the nation.

“Debit card use has been declining since 2011, making the effectiveness of the government policy questionable,” said Jung Hoon, a research fellow at the KB think tank.

The Korean government encouraged credit card use after the 1998 Asian financial crisis in order to boost private consumption and increase transparency in tax collection. As credit card companies offered a variety of auxiliary services and discounts, credit card spending spiked from about 380 trillion won in 2005 to near 700 trillion won for the past 10 years.

“According to a survey by the Bank of International Settlements, the country’s credit card use in comparison to the GDP is the world’s largest,” Jung said.

As the number of one-person households rises, there is a notable change in the card use practices. The average amount per payment is on the decrease. Small payments of 10,000 won or less surged 42 percent compared to 2000, the report showed. Compared to card spending by families at large restaurants or department stores, use of credit and debit cards jumped significantly at convenience stores and fast-food chains, where payments are relatively smaller.

For the past five years, use of credit cards in taxis, cafes and convenience stores noticeably jumped.

Over that time, the average default rate at credit card companies has remained less than 2 percent, keeping the industry sound.

“Because risks of continuously rising household debt exist in our economy, there should be consistent monitoring,” Jung said.

According to the Bank of Korea, household debt, including credit card spending, reached 1,060 trillion won as in September. Korea’s household debt has been busting records since the second quarter of 2013, posing a serious threat to economic growth.

However, despite rising credit card use, issuers’ profitability is on a downward slope, as the growth of costs outstrips revenue growth.

As the government is promoting fintech, an area that combines financial services with mobile technology, credit card companies are expected to see their profitability fall even further due to rising costs of research and development, the researcher at KB’s think tank added.