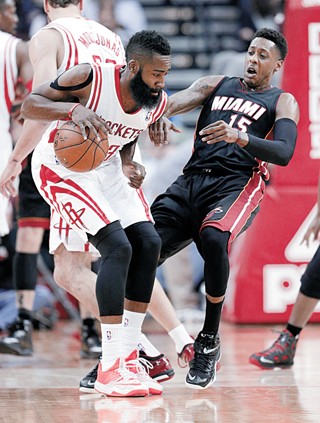 The Houston Rockets were so bad on Friday night that Coach Kevin McHale talked about retiring.

James Harden scored 28 points, Dwight Howard added 23 and the Rockets rolled to a 115-79 win over the Miami Heat on Saturday night, rebounding quite nicely from their most lopsided loss of the season.

“What a difference a night makes,’’ McHale said. “We played well. As bad as we were last night, we moved the ball pretty well tonight.’’

McHale said his team was “terrible’’ in a 111-83 loss at New Orleans on Friday night. But the Rockets used a 19-point second quarter from Howard to build a double-digit lead against Miami, and then put together a big run in the third before coasting to their biggest win of the season.

“The effort and the energy was just a little bit different,’’ Howard said. “I don’t know what happened in that game [Friday night], but it happened ... we’ve got to make sure that it doesn’t happen again.’’

Houston’s starters were benched early in the third quarter against New Orleans by a disgusted McHale. On Saturday night, they spent the fourth quarter on the bench with the Rockets leading by 34 after three.

Dwyane Wade and Chris Bosh scored 15 apiece for Miami, which has lost four in a row.

“We’re trying to get our collective mental toughness together and we haven’t been able to do it and tonight was a big example of that,’’ coach Erik Spoelstra said. “We’ve talked about it in every single way and we simply have to do better and our guys understand that.’’

Bosh seemed frustrated with questions about why the Heat are struggling so much lately.

“I’m not trying to figure things out,’’ Bosh said. “I’m just trying to win a game and trying to stop answering all these questions.’’

Josh Smith, who signed with Houston on Dec. 26, was used as a reserve and Donatas Motiejunas started in his place. Smith brought the crowd to its feet with a one-handed dunk that made it 88-60 late in the third.

The Rockets opened the third quarter with an 18-4 run to build a 79-53 lead. Howard scored the first four points of the half before Harden chipped in with six straight points.

Jason Terry and Corey Brewer made back-to-back 3s to give Houston a 94-60 lead entering the fourth.