Top:A 1947 book, titled “New Owner of Joseon,” introduces respected figures from the Korean history to boost patriotism. Provided by the National Museum of Korean Contemporary History. Above:In the days when there were no Xerox copy machines, people opted for this mimeograph used in the 1960s to make handouts.

Tests are an integral part of the lives of young Koreans, who are notorious for their passion for education.

Many Korean youngsters spend a great portion of their time and energy preparing for the College Scholastic Ability Test (CSAT).

And just when they think those days are gone and that they can enjoy their university years, there are exams to join the country’s work force, such as the Samsung Aptitude Test for admittance to Korea’s largest conglomerate. There are also several tests to obtain licenses and become specialists in today’s highly competitive society.

At the exhibition “Seeing the Past in the Examinations,” which is currently underway at the National Museum of Korean Contemporary History, one can see how tests have evolved since late 19th century to now. Artifacts that attest to Koreans’ academic zeal during the 1950-53 Korean War are also on show.

But tests similar to the ones we see today, according to museum curator Kim Seong-jun, can be traced back to the 1894 Gabo Reform, during which Korea tried to embrace modernity as well as political, economic and social ideals in the West.

“Between the Gabo Reform [1894] and the years after Korea’s independence [in 1945], modern tests got introduced in Korea and they evolved,” Kim said.

The section dedicated to passion for education during the Korean War is notable. The relics on display show that many schools in Seoul moved to Busan as southerners fled from the North Korean army and took refuge in the port city. Textbook covers often carried images of the Air Force or combat planes in reflection of the country being at war.

“Many magazines and guide books on state exams or bar exams have been released since the 1950s,” the museum said in a press release, “which shows that in a war-torn country, many Koreans hoped for success through such tests.”

Interestingly, Koreans still flock to take state or bar exams in order to climb up the social ladder. 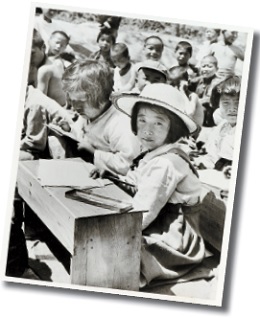 A 1952 photograph shows children studying on the streets during the 1950-53 Korean War.

Also on display is a lottery wheel from 1969 - the year Korea abolished enrollment tests for middle schools and opted for a lottery system instead. It’s a rare item for those of us today who are more familiar with online lottery systems.